If there is one country that has fulfilled the potential of military aviation to its fullest, it is the United States. It’s air forces have dominated the battlefield over land and sea from World War II to this day, and have pioneered many of the most important developments in aviation technology since. Despite budgetary challenges, the overwhelming superiority of US air power is unlikely to be eroded anytime soon.

Despite inventing the aircraft, the US fell behind its European counterparts in developing military designs up to World War I, when it was forced to rely almost entirely on French aircraft up until the Armistice. Nevertheless, a boom in civilian and military aviation would take place during the 1920s resulting in iconic designs such as the P-36 Peashooter, the first all-metal monoplane fighter, along with important innovations strategic and naval air power. Billy Mitchell's famous experiments in aerial bombardment against captured German warships during the 1920s proved that the days of the big-gun battleship were nearly over and that aircraft would soon come to define the events on land and at sea.

After suffering the effects of the Great Depression, the US was largely unprepared for a major global conflict when World War II began in 1939. While remaining neutral over the next two years, the country made efforts to catch up with its European counterparts and a new generation of aircraft gradually made it into front-line service by 1942-43 in time to swing the balance of air power into the Allies' favor. Perhaps the most iconic of these was the P-51 Mustang, an aircraft that had enough range to escort bombers to Berlin and back and which largely broke the back of the Luftwaffe's day fighters singlehandedly over the course of a few months in 1944. The country's strategic bomber force also became a formidable military asset, one that by 1945 was capable of launching 2,000-bomber raids against German cities, and wreaking similar havoc against Japan's. At sea, technical inferiority compared to Japanese carrier-based fighters proved to be short-lived, as a new generation of aircraft like the Hellcat and Corsair helped turned the tide in the Pacific even sooner than in Europe. By war's end, the US's ground-based and naval air forces were by far the largest and most powerful the world had ever seen, and also had a monopoly on the deadliest weapon yet designed: the atomic bomb.

The US maintained its lead in the air during the Cold War, despite the challenge from the USSR. This technical and numerical superiority enabled it to dominate the aerial battlefield in practically all conflicts that it has been involved in. Its strategic bomber force was also one of the mightiest weapons in the country's arsenal and during most of the Cold War, had hundreds of bombers poised to strike against the USSR had a nuclear war erupted. Since the end of the Cold War, US's superiority in air warfare (built on the foundations of its AirLand Battle doctrine) has been largely uncontested, as evidenced by its complete supremacy in conflicts like the 1991 Gulf War. Today it is the only air force equipped with stealth aircraft, and is also the world leader in drone warfare. Although the recent economic crisis has forced some shrinking of their military budgets, the USAF and USN's air power will remain second to none for the foreseeable future.

There are currently 155 entries and data on 277 variants. 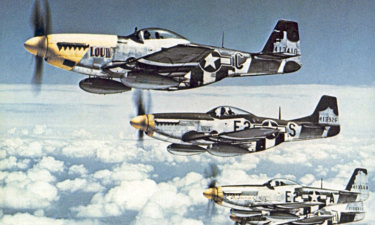 As elegant as it was deadly, the P-51 Mustang helped snatch control of the skies from the Luftwaffe. 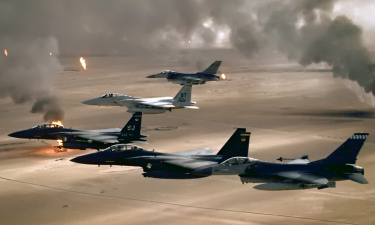 The US-led Coalition's smashing defeat of Iraq was made possible thanks to air power.