With a name that appealed more to science fiction than warfare, the Lockheed F-104 Starfighter was billed as 'a missile with a man in it'. Designed by a Lockheed Skunk Works team led by Clarence Johnson, the F-104 was the first operational fighter capable of Mach 2 speeds and also claimed both the world speed and altitude records. It was instantly recognizable by its slim fuselage, T-tail, and and small, mid-mounted wings which in a departure from jet aircraft convention, were designed straight rather than swept. The thin wings meant there was little room for fuel and as a result, most aircraft flew with fuel tanks fitted in the wingtips although range was still poor. The F-104 was also notable for being the first aircraft to be equipped with the M61 Vulcan cannon which would be the standard fixed armament of most US fighters since. Despite being the most ambitious of the Century Series of fighters, the F-104 was built in only small numbers for the USAF where it proved to be disappointing as both an interceptor and a fighter-bomber and it would also be haunted by a poor safety record. Its great success would lay in the export markets where most eventually served with numerous major NATO air forces in what was dubbed the 'deal of the century'. Unfortunately this too was plagued with controversy as it was later revealed that Lockheed paid millions in bribes to European politicians to obtain sales (this nearly led to Lockheed's demise). In USAF service, the Starfighter saw limited action in the Vietnam War but ultimately replaced due to the availability of superior designs for either role. Later versions were mostly geared for export and were true multi-role aircraft, significantly enhanced for air combat, ground attack, and reconnaissance missions. A total of 14 countries operated the Starfighter most of which were NATO partners (which set up production lines in Belgium, Canada, Germany, the Netherlands, and Italy) in addition to Taiwan, Japan, Jordan, and Pakistan, the latter which used it in combat against India. Some were still in service in the year 2000.

Developed from the Lockheed Model 83, the first XF-104 had its maiden flight on 4 March 1954 followed by evaluation YF-104A units and finally, the first of the F-104A units which were optimized as interceptors which could carry wingtip Sidewinder missiles. These were followed by the F-104C fighter-bombers with inflight refuelling capability and underwing hardpoints for bombs and missiles. Two-seat versions of these aircraft were known as the F-104B and D respectively while the QF-104 was a target drone conversion. The first of the multi-role variants was the F-104G intented for German service: it had a strenghtened structure, increased fuel, new avionics, and could carry air-to-air and air-to-ground weapons (most were built in Europe by a consortium that included Messerschmitt, Dornier, Fiat, Fokker, and SABCA). Related to this was the TF-104G two seater and the RF-104C reconnaissance platform. The F-104J was a similar version built by Mitsubishi for Japan but which featured only air-to-air capability. In contrast, the CF-104 built by Canadair for Canada was optimized for the strike role and initially lacked guns though they were later installed. The final Starfighter variant was the F-104S built by Fiat for Italian service. It had more powerful engines, even more weapons hardpoints, and could carry Sparrow missiles (including the Italian equivalent, the Aspide). These were further upgraded as the F-104ASA which remained in service past the turn of the century pending the introduction of the Eurofighter. 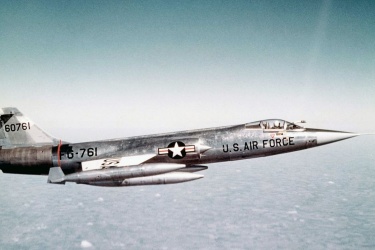