Though never actually adopted for service by the US, the Northrop F-5 Freedom Fighter became one of the most successful aircraft exports of the past couple of decades. Lightweight, highly maneuverable and based on a simplistic design, the F-5 was marketed via the Military Assistance Program (MAP) for friendly European and Third-World countries which could otherwise ill afford a more expensive and complex fighter. Consequently, the F-5 became popular with a myriad of air forces, many of which continue using it up to today with improved avionics and weapons which make it a remarkably decent fighter (it is widely considered to have excellent dogfighting capabilities) despite its low-budget characteristics. F-5s were briefly combat tested by the US over Vietnam and later used for training by aggressor squadrons but over 30 other countries adopted it including Canada and Spain which built it under license, many of these still use it as their principal front-line fighter today.

The first prototype F-5 flew on 30 July 1959 and entered production as the F-5A Freedom Fighter with a two-seater trainer, the F-5B. The USAF combat tested a number of these aircraft over Vietnam, renaming them F-5C and F-5D respectively. Later, Northrop would win the International Fighter Aircraft (IFA) competition for an export-based successor, this became the F-5E Tiger II which was an improvement over previous versions in practically every aspect including avionics, engine, airframe and weapons (the F-5F was its two-seater trainer). Other versions include the RF-5A and RF-5E Tigereye for reconnaissance and the improved single-engined F-5G (also known as the F-20 Tigershark) which was later cancelled due to lack of interest. 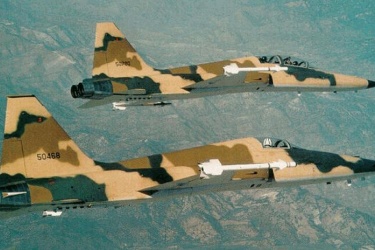