Without a doubt one of the most recognizable aircraft of the last half-century and an undisputed triumph of US aviation technology, the McDonnell F-4 Phantom II has the unique distinction of being the first carrier aircraft to be eventually adopted by an air force as its principal fighter. It entered service with the UN Navy during the early 60s and soon became a mainstay of the US military effort in Vietnam. However, it did not take long for the USAF to pay attention to its many advantages which placed it in a league of its own against any comparable aircraft at the time, thus began a service life of over four decades in which the Phantom II became not only the main fighter of the United States but also a number of allied nations including the United Kingdom (where it was the first foreign-built aircraft ever adopted as the main RAF and RN fighter), Germany, Japan, South Korea, Israel, Egypt, Greece, Spain, Australia, Turkey and Iran. The Phantom was designed from the start as an all-weather tandem-seat fighter-bomber, and with its air-to-air capability focused on a powerful air-intercept radar and missile armament, including provisions for Sparrow missiles semi-recessed into the fuselage. Its wings featured a characteristic dihedral towards the tips, and later versions incorporated leading edge slats and slotted stabilizers to improve maneuverability. Despite this, the Phantom was not particularly agile although it did boast of impressive speed and thrust. Initially, the Phantom lacked fixed armament under the prevailing belief that in the supersonic age, most air combat would take place beyond visual range by missile-armed fighters. This was quickly proved wrong during the Vietnam War when Phantoms began falling prey to smaller and nimbler MiGs, and consequently were retrofitted with gun pods (which came at the cost of decreased performance) and eventually armed with them from the start. In the attack role, the Phantom was large enough to be able to carry an impressive payload and gradually replaced the F-105 as the main tactical bomber in Vietnam. Besides Vietnam, it saw extensive action with Israeli units in the Yom-Kippur War and later in the Gulf War as radar-suppression (SEAD) units. This was the Phantom's last war in front-line US service having been replaced by then by the F-14 (USN) and F-15 (USAF). During its lifetime, F-4s recorded 393 air-to-air kills, an impressive tally in the jet age which has undoubtedly helped turned it into an enduring symbol of the Cold War and one of the greatest fighters of all time.

The prototype XF4H-1 first flew on 27 May 1958 and was handed over to the USN as the F4H-1F (later redesignated F-4A), mostly for trials and training. The first version to see active service was the F-4B with the USN and USMC which improved on its predecessor by having more powerful engines and radar as well as a raised cockpit for better visibility. The next naval version was the F-4J which was recognizable by the lack of an undernose IRST sensor and having a host of avionics improvements and a more powerful engine. A number of F-4Bs were eventually modernized to F-4N standards in the early 1970s, while a similar program for F-4Js resulted in the F-4S. In USAF service, the Phantom was introduced as the F-4C with only minimal changes with respect to its carrier-based counterpart (including folding wings) whereas the later F-4D was more adequately tailored for USAF use and featured a more sophisticated avionics set for both intercept and bombing missions as well as a wider range of weapons. The IRST was also removed although it kept the undernose bulge. Nevertheless it lacked any fixed armament, an omission which would cost dearly over Vietnam. This prompted the development of the F-4E which incorporated a 20-mm rotary cannon under the lengthened nose as well as further avionics and engine improvements. It was to be the most widely produced Phantom of all, with around one-third exported. Other versions included the RF-4C and RF-4E for tactical reconnaissance and the F-4G Wild Weasel (converted from F-4Es) for SEAD duties. This was the last Phantom variant in active USAF service, retiring in the 1990s. Finally, certain country-specific variants were produced. These included the F-4F for Germany which was nearly identical to the F-4E but without the slotted stabilizers and lack of Sparrow capability although they were later adapted to carry AMRAAM missiles. They remained in front-line Luftwaffe service into the 2000s. Mitsubishi-produced versions for the JASDF were known as the F-4EJ and later upgraded into the F-4EJ-Kai, as were the Kurnass and Terminator variants of the Turkish F-4E fleet (both described separately). The F-4K (Royal Navy) and F-4M (RAF) for the United Kingdom featured Rolls-Royce Spey engines and were known locally as the Phantom FG.1 and FGR.2 respectively (also described separately). 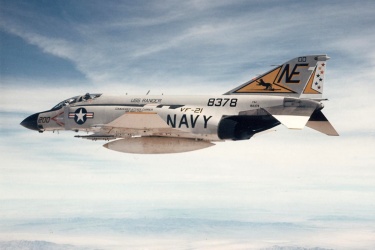