The McDonnell Douglas F/A-18 Hornet is the US Navy's premier fighter and strike aircraft, built for a 1974 VFAX requirement which called for a light-weight aircraft to replace the F-4 and A-7 which had been the mainstays of the carrier air wings in the 1970s, and to complement the much larger and more expensive F-14. The design of the Hornet came from the YF-17, the lightweight fighter that competed unsuccessfully against the F-16 for a USAF program; the Navy was more attracted to the YF-17's twin engines as it was seen as more reliable for operations over water. The two versions built, the F-18 and A-18, were eventually merged into a highly versatile multi-role aircraft which was given the unconventional designation F/A-18 meaning it can successfully perform both functions. The F/A-18 resembles its USAF counterpart, the F-16, by having large cambered leading-edge extensions but is unique by its outward cantered twin fins, both of these characteristics allow it extreme maneuverability under high angles of attack. Pilot work load is reduced by a state-of-the-art cockpit and a digital fly-by-wire system as well as a sophisticated avionics package based on the AN/APG-73 radar giving the Hornet all-weather day and night capability. When the need for a fleet defender declined after the end of the Cold War, The F-14's days became numbered and the F/A-18 would soldier on as the sole USN tactical aircraft (and also equipped the USMC's land-based squadrons). A major redesign in the 1990s following the cancellation f the A-12 Avenger resulted in the F/A-18E/F Super Hornet, which is considerably larger than its predecessor. The redesigned airframe is noticeable for its dog-tooth leading edges and wider extensions, intake ramps, extra hardpoints, as well as improved range and payload. It also features a reduced radar cross-section, can carry almost the entire suite of US smart bombs and missiles, and was the first US tactical aircraft to be equipped with an AESA radar. The F/A-18 first saw action in the 1986 Libya strikes and later in the Gulf War. It has also participated in the NATO interventions in Yugoslavia as well as the Afghanistan and Iraq wars and the recent interventions in Libya and Syria; in 2017 a Super Hornet shot down a Syrian Su-22, this was the US's first air-to-air kill since the 1999 Kosovo operation. The F/A-18 has been exported to Canada, Australia, Finland, Kuwait, Malaysia, Spain and Switzerland.

The maiden flight of the Hornet took place in 18 November 1978 and entered production as the F/A-18A. In the late 1980's, production switched to an improved version, the F/A-18C which featured a new databus-link, improved night capability, and ability to carry the AMRAAM and Maverick missiles. Finally, a highly improved next-generation Hornet is designated F/A-18E Super Hornet and has replaced the much more expensive F-14. The Super Hornet is larger, has more powerful engines and payload and can carry newer weapons like JDAM and JSOW precision weapons. Although it lacks the ability to carry long-range Phoenix missiles in the fleet defender role, later version of the AIM-9C AMRAAM missile offer a considerable increase in range. Two-seater combat-capable trainers are known as the F/A-18B, F/A-18D and are based on the F/A-18A and C respectively. The F/A-18F is also a two-seater version of the Super Hornet but is considered a full-fledged multi-role aircraft rather than a trainer. Interestingly, the USMC has refused to operate Super Hornets, preferring to wait for the F-35 instead. The EA-18G Growler is a dedicated electronic warfare variant, with numerous jamming pods and is optimized for SEAD missions. Foreign versions include the CF-18A and B (Canada), EF-18A and B (Spain), and KAF-18C and D (Kuwait). 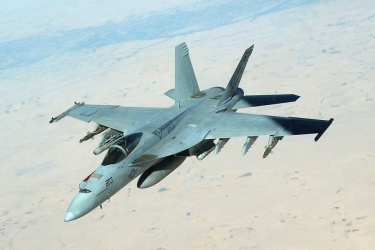