The General Dynamics F-16 Fighting Falcon (nicknamed Viper by its pilots) is without a doubt the most successful and widely produced US fourth-generation fighter, one that has served with distinction in numerous conflicts as well as in the air forces of various allied nations. The F-16 was developed from the 1972 Light-Weight Fighter competition where it beat the rival Northrop YF-17 for a small, cheap and simple aircraft with export potential. Unlike the larger F-15 which was designed purely for air superiority, the F-16 had considerable ground attack capability although thanks to its small size and agility is a formidable dogfighter. Among its advanced equipment is a digital fly-by-wire system (giving it the nickname of the "electric jet") and a multi-mode AN/APG-66/68 radar. Additionally it was the first fighter in the world with HOTAS controls and a full glass cockpit, thereby revolutionizing cockpit design. Visibility also benefited from a frame-less canopy which gave the pilot exceptional situational awareness. Over its service life, F-16s have received extensive avionics and equipment upgrades which has multiplied its capabilities far in excess of its original requirements; modern F-16s can carry most US air-to-air and air-to-ground ordinance and can be fitted with targetting pods and ECM pods. This has allowed the Viper to remain competitive even in compared to more modern fighters, especially in terms of value for money. As a testament to its success, the F-16 serves with over two dozen foreign air forces, including Israel (which was the first to use it in combat), Pakistan, South Korea as well as NATO allies Belgium, Denmark, Netherlands, Norway, Portugal, Greece, and Turkey (some have been lent to Italy as well). Its combat record is impressive, having attained a phenomenal 75:1 kill ratio (most of these by Israeli units and its only loss against a Greek Mirage 2000) over numerous conflicts including the Lebanon civil war, Gulf War, Iraq War, Afghanistan and Libya. During the Gulf War, the F-16 was the most numerous Coalition aircraft and flew around 13,500 sorties (mostly bombing), with only three losses to ground fire. The F-16 is currently the most numerous fighter in the USAF inventory and will remain so until large numbers of F-35s become available.

First flight of the prototype YF-16 took place on 2 February 1974. The initial production variant, designated F-16A entered service in 1978 along with a two-seater combat-capable trainer, the F-16B. These composed blocks Bk 1/5/10/15/20. A dedicated interceptor was known as the F-16A/B ADF and was modified from existing Bk 15 airframes. It was the first variant to be able to carry BVR missiles (Sparrows). A major upgrade, called the Multi-National Staged Improvement Program (MSIP), led to the definitive F-16C which featured various structural and avionics changes which have continued throughout various production blocks (most US F-16s have been brought to F-16C standards by now). These also led to an improved trainer, the F-16D. The initial block number for MSIP aircraft was the block 25 which retained the original Pratt & Whiteny engines and small-mouth intakes, after which the use of alternative engines resulted in the 30/32 series (GE and Pratt & Whitney respectively, the former which were eventually fitted with distinctive large-mouth intakes). The Bk 30/32 was the first to be able to carry AMRAAM and HARM missiles although in the latter case, usually accompanied by a F-4G for targetting. Further structural, avionics and weapons upgrades resulted in the Bk 40/42 which was equipped with LANTIRN pods for night attack capability (informally designated F-16CG). Later came the definitive Bk 50/52 which are currently the most advanced versions in USAF service. Some serve as dedicated anti-radar (Wild Weasel) units designated F-16CJ. Newer variants include the F-16E/F Bk 60 (single and two-seaters) for the UAE, these include various avionics, powerplant, and weaponry improvements, most notably the AN/APG-80 AESA radar which is the most advanced on an F-16. Finally, the F-16N is a specialized aggressor aircraft used by the US Navy for advanced combat training. Foreign versions include the F-16I two-seater for Israel, the F-16AM in service with Belgium, Denmark, Portugal, the Netherlands, Norway, and Pakistan, and the KF-16 for Korea (license built by KAI). The Japanese F-2 and Taiwanese F-CK-1 are heavily based on the F-16 and are described separately. The cancelled Israeli Lavi was also related. 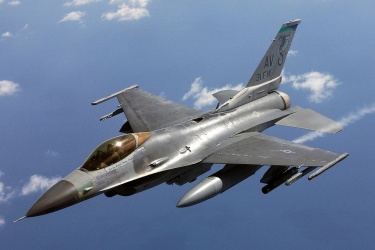