Designed with a myriad of roles in mind, the General Dynamics F-111 Aardvark (a name which was only officialized on the very day of its retirement) was the first tactical aircraft with variable-geometry wings to enter service in the world. The F-111 was born out of the TFX requirement which called for a long-range strike aircraft for the USAF and a carrier-borne long range interceptor for the USN both of which were to be equipped with the most advanced avionics available such as terrain-following radar. However the naval variant was an umitigated disaster and was cancelled with the role later given to the F-14. Nevertheless, in USAF service the F-111 performed admirably despite a plethora of initial difficulties which led to frequent groundings and upgrades. F-111s saw service during the later years of the Vietnam war where a group of 4 Aardvarks could carry as much ordinance as 20 F-4s. The next major combat deployment of the F-111 was during the 1986 strikes on Libya where they flew directly from bases in the UK with aereal refuelling along the way. Finally, the F-111 was used with much success in the Gulf War where they delivered a punishing blow of precision-guided munitions. Now retired from USAF service after years of outstanding service, the F-111 continues to fly with the Australian RAAF, its only export customer.

The YF-111A prototype had its maiden flight on 21 December 1964 and entered service with the USAF as the F-111A which saw extensive service during the late campaigns of the Vietnam War and was subsequently upgraded into the F-111E. For the USN, a naval interceptor variant was designated F-111B but was cancelled after only seven had been built. The final definitive strike variants were the F-111D and F-111F, this last one with a much more stable engine and the ability to be equipped with the latest advanced munitions of its time. This variant also saw service in Libya and Iraq and was eventually retired in 1996 where on its last day of service was finally christened the Aardvark, a name which had hitherto been un-official. Early in its development, the Aardvark had been modified a a strategic nuclear bomber in SAC service, this was known as the FB-111A and could carry the AGM-69 stand-off nuclear missile. A final electronic warfare variant is known as the EF-111A Raven, these are all F-111A conversions by Grumman based around the AN/ALQ-99E tactical jamming system. They were retired in 1998. 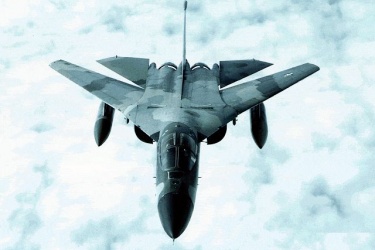