Since its introduction in the second half of the 1970s, the McDonnell Douglas F-15 Eagle has been one of the most formidable fighters in service with any nation, dominating the airspace in every conflict in which it has been involved. The F-15 was designed as a result of the scare generated by the perceived capabilities of the Soviet MiG-25. In the event, the MiG-25 proved to be far less capable than feared given its role as an interceptor rather than a fighter, but the F-15 nevertheless went on to represent a quantum leap over the aircraft it was designed to replace, the F-4. With large low-aspect ratio wings, the F-15 is extremely agile and maneuverable as well as having an exceptional climb rate and service ceiling. It is also equipped with advanced avionics based on the AN/APG-63/70 pulse-Doppler radar, arguably the most powerful fitted on a fourth generation fighter, as well as a sophisticated ECM suite. Although it was never designed for ground-attack (the developer's motto was "not a pound for air-to-ground"), it was eventually recognized as an excellent strike platform which resulted in the F-15E Strike Eagle. Designed for deep strike missions, the F-15E can destroy high value targets with precision-guided munitions and stand-off missiles while retaining its capabilities as a fighter. It has one of the highest payloads of any tactical aircraft in service, and can be equipped with nearly every type of US munition (and many foreign munitions as well). The F-15's claim to fame was during the Gulf War where F-15 interceptors cleared the skies from Iraqi aircraft in the opening days, scoring 32 out of the 35 kills by Coalition aircraft and suffering no losses of their own. Although a relatively immature platform at the time, Strike Eagles were also very successful, attacking a range of high-value targets including SCUD missile sites. Both aircraft would go on to have sterling combat records in the Bosnia and Kosovo operations, the wars in Afghanistan and Iraq, and more recent conflicts in Libya and Syria. F-15s have been exported or license-produced by Japan, Saudi Arabia, Singapore, South Korea, and Israel, the latter which has used it extensively, racking up more kills than the USAF (mostly against Syrian aircraft in 1979-82). Although the F-15 has now been superseded by the fifth generation F-22 in US service, it remains in widespread service with the ANG and with a few foreign-based active squadrons. Many are being upgraded with AESA radars and helmet-mounted displays. The F-15E remains the US's main attack aircraft.

First flown on 27 July 1972, the initial production variant of the Eagle was designated F-15A which entered service in 1976 and remained in production until 1978 when an improved version, the F-15C, was conceived (modifications include avionics upgrades and increased take-off weight and fuel capacity). Two-seater trainers of both variants are designated F-15B and F-15D respectively. The F-15E Strike Eagle was first flown in 1982, based on a modified F-15B trainer, it features an improved power plant and an AN/APG-70 multi-mode radar as well as the capacity to deploy with a large variety of air-to-ground munitions. The F-15E has room for a second crewman: a weapons systems officer which reduced the work-load for the pilot for bombing missions. The most recent improvements in the F-15 fleet include the installation of advanced AESA radars which will allow them to increase their capabilities until the F-22 enters service in large numbers. Export versions of the Eagle include the F-15J and DJ (two-seat) for Japan, the F-15I Ra'am (Israel), F-15SK Slam Eagle (South Korea), F-15S and F-15SA (Saudi Arabia), and F-15SG (Singapore). All except the Japanese models are based on the F-15E Strike Eagle. 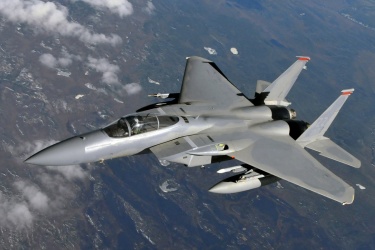