Designed as a successor to the F-15, the Lockheed Martin / Boeing F-22 Raptor is probably the single greatest leap in aircraft technology since the jet age. The F-22 was the result of the ATF (Advanced Tactical Fighter) requirement of 1981 which called for a stealthy design with STOL capability, supercruise, and thrust vectoring, as well as high levels of reliability and ease of maintenance. Advances in stealth technology since the development of the earlier F-117 (the world's first stealth aircraft) allowed the F-22 to have a more conventional shape, with large wings and twin tail-fins angled outward. It can supercruise at up to Mach 1.5 and is extremely maneuverable thanks to its two-dimensional thrust vectoring, thus making it a lethal dogfighter even though it is unlikely to ever need to engage in close combat: it is estimated that the F-22 has a radar-cross section the size of a marble, and its advanced AN/APG-77 AESA radar has considerable jamming capabilities as well. The F-22 also features an advanced cockpit design and high levels of automation. To maintain stealth, three bomb bays carry the F-22's ordinance although external hardpoints can be fitted in missions that do not require stealth, these include both air-to-air and air-to-ground weapons although ground attack capability is secondary and therefore limited to the bomb bay's size (typically one or two 1,000-lb JDAMs). Post Cold-War cuts and the reduced need for a pure air superiority fighter means that the F-22 was produced in much smaller numbers than originally intended, just 187 aircraft from an originally planned 750; at $150 million it is by far the most expensive fighter aircraft. Due to its sensitive technology, no export orders have been permitted despite interest from some US allies (notably Japan). Raptors have been used in combat for the first time over Syria, performing mostly ground-attack and reconnaissance missions.

The prototype YF-22 took to the air for the first time on 27 August 1990. It beat out the rival Northrop/McDonnell Douglas YF-23 which was seen as more stealthy but less maneuverable. The complexity of the development of this aircraft is evident that the first production F-22A made its maiden flight only until 7 September 1997 and only entered service nearly one decade later in December 2005 with the 27th Fighter Squadron in Langley AFB. A navalized version with variable-geometry wings was proposed but abandoned early in the aircraft's development. 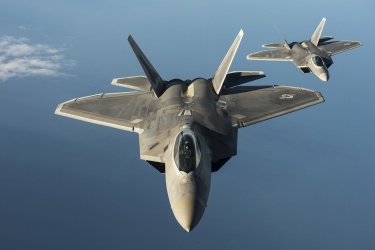