From humble beginnings in the pre-war period, the US emerged from World War II with one of the most powerful armies the world had ever seen, backed by the strength of its iconic Sherman tanks. From the Cold War onwards, the US has been at the forefront of armored warfare, its technological prowess highlighted after its impressive Gulf War victory in 1991.

The United States was also a late entrant to armored warfare, and remained somewhat backward compared to Europe during most of the interwar years. As was the case with most heavy weapons, the US relied extensively on Allied (mostly French) tanks during World War I, and the first indigenous designs did not appear until after the war ended, initially with British collaboration. The development of tanks in the US was also hampered by demobilization after the war, which resulted in the US Army reverting to its small peacetime size. Isolationist sentiment was not particularly conducive to tank development as peacetime funding was almost exclusively focused on the Navy (and to a lesser extent, the Army Air Corps).

When World War II erupted, the US was forced to make up the lost ground in just a few years. Early US tanks were simple, reliable and packed a strong punch for their day, but were otherwise bulky and poorly protected. Although the M4 Sherman shared many of these criticisms, it was ultimately chosen as the focus of US wartime tank production and over 40,000 were built, equipping not only most US Army tank units but also British, Commonwealth and Free French forces. General Eisenhower went so far as to call the Sherman one of the true war winning weapons, and it became a potent symbol of the Allied drive to liberate Europe. By the end of World War II, the US Army was the second largest in the world with 16 armor divisions and dozens of independent tank battalions deployed across Europe and the Pacific. And along with the British Army, it was the first to become fully motorized thanks to lavish use of trucks, jeeps, and personnel carriers that gave US forces unprecedented mobility.

After the war, the US retained its commitment to the defense of Europe by maintaining a permanent presence in Germany, where it was responsible for NATO’s southern flank. Tank development after the war gradually closed the qualitative gap with the Red Army, although NATO’s forces remained numerically inferior. However, the novel AirLand Battle doctrine of the 1980s would go far to push the boundaries of the Army’s military capability, and the entry in service of third-generation tanks such as the M1 and the M2 Bradley infantry fighting vehicle finally gave the US an undisputed technological edge. In its first post-Cold War test, the 1991 Gulf War, US ground forced achieved an impressive victory over the Soviet-equipped Iraqi Army, securing the liberation of Kuwait in just 4 days. Today, the US remains the strongest land power in the world, even though it is gradually evolving away from its Cold War role and into focusing on the emerging and asymmetrical threats of the 21st century.

There are currently 50 entries and data on 97 variants.

Despite its many drawbacks, the M4 Sherman tank became the backbone of the Allied armies. 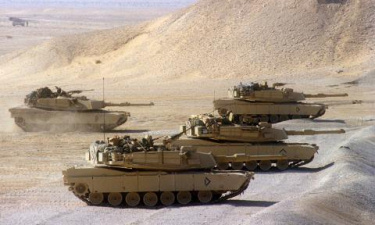 Desert warfare has its new king, the M1 Abrams, which during the Gulf War shattered Iraq's vaunted armies.