It is impossible to overstate the importance of the M4 Sherman to the Allied war effort during World War II: with a production run of nearly 50,000 vehicles it was by far the most widely produced US or British tank of the war, rivaled only by the Soviet T-34 which was built in similar numbers. Of these, nearly one-third were offered as Lend-Lease, primarily to British and Commonwealth forces but also the USSR and the Free French. The M4 was developed to replace the M3 Grant in US Army service, and featured a more conventional design with a single turret-mounted 75-mm M3 gun. The design stressed mechanical reliability as well as ease of maintenance and repair, making it one of the most dependable tanks of the war, especially compared to the German panzers it faced. I was also easy to mass produce. However, it was not without some severe shortcomings, the most obvious being its high profile as well as poor armor protection which was exacerbated by an engine and ammunition propellant charges with a tendency to explode when hit. Shermans first saw combat with the British 8th Army in North Africa (including El Alamein), where they outperformed the Panzer IIIs and IVs that they faced, most of which were equipped with 50-mm guns. Unfortunately, the Sherman was less well prepared to face the Panthers and Tiger IIs of the late war period (as well as the up-gunned Panzer IVs), and had to rely more on strength in numbers to out-duel the Germans in Europe (British use of the 17-pounder gun on M4 hulls resulted in the Sherman Firefly which was capable of taking on any German tank). In the Pacific, however, the M4 was broadly superior to any Japanese tank and therefore faced little opposition. Large numbers of Shermans were available at the end of the war, and many were exported abroad to over 20 countries. US M4s still saw extensive action during the Korean War, but were gradually replaced by the M26. Locally up-gunned M4s known as Super Shermans were used by Israel with much success during the Arab-Israeli wars.

The T6 prototype was chosen in 1941 as a successor to the M3, and initially built as a modified M3 mounting the 75-mm gun in the turret, rather than a side sponson. The Sherman was produced through a number of different variants, which were not designated on the basis of their linear evolution. The basic M4 featured a welded hull and a Continental R975 gasoline engine. The M4A1 differed in having a cast hull, which was characteristically more rounded at the front, and along with the M4 were the most numerous variants used in Europe up until well after D-Day. The M4A2 returned to the welded hull but was powered b a GM 6046 diesel engine, and saw widespread service in the Pacific as well as for Lend-Lease. The M4A3 was the most widely used late-war Sherman, and was the first to feature the Ford GAA gasoline engine. Many were designed with a safer ammunition storage system to prevent propeller charge explosions and known as the M4A3W. The last major variant was the M4A4 with a Chrysler A57 engine and was mostly used for Lend-Lease, while the M4A6 with a cast/welded hull was produced in only small numbers and never used in combat. In 1944 it was decided that the basic 75-mm was increasingly incapable of defeated the latest German armor. It was therefore decided to equip existing variants with a more powerful 76-mm M1 gun. These up-gunned Shermans were designated with a (76) suffix and included the M4A1(76)W, M4A2(76)W, and M4A3(76)W but were otherwise identical to their base versions. Others were fitted with a short-barreled 105-mm howitzer and were known as M4(105) and M4A3(105). Up-armored Shermans were known as the M4A3E2 "Jumbo" while those equipped with a horizontal volute spring suspension (HVSS) were given the designation M4A3E8(76)W and were nicknamed "Easy Eight" due to their smooth ride. Both of these were the main variants used in the Korean War. Shermans fitted with rocket tubes included the T34 (Calliope), while a flamethrower variant was known as the M4A3R3. British Shermans corresponded with the US designations as the Sherman Mk. I (M4), Mk. II (M4A1), Mk. III (M4A2), and Mk. V (M4A4). Those fitted with the 17-pounder gun were known as Sherman Firefly and are described in a separate entry. Israel up-gunned M4s, were known as the M50 and M51 Super Sherman. Non-combat US versions include the M32 and M74 Tank Recovery Vehicles, the M34 Prime Mover, M4 Dozer (with a dozer blade), Sherman DD (Duplex Drive) amphibious tanks fitted with a flotation screen that saw action during D-Day. The M4 chassis was also used in a number of howitzer and gun motor carriages (M7, M12, and M40), a cargo carrier (M30), and the M10 and M36 tank destroyers that are described separately. 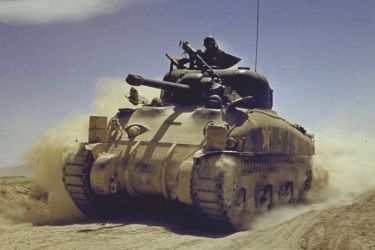