Development of the M48 Patton was spurred by the Korean War, and it was developed in the space of just three years, entering US Army service in 1953. Compared to its predecessor, the M47, the M48 featured a new turret and redesigned hull, as well as improved automotive components but shared the 90-mm gun (this being the last US tank to be equipped with it), as well as the high profile that was characteristic of the Patton series. Removal of the hull machine gunner also meant that it was the first US tank to require just four crew members. Over its service life, the M48 received numerous equipment upgrades, but the most notable change was the use of a 105-mm in its last major production variant, the M8A5, the same gun eventually fitted on the M60. Despite it being gradually replaced by the M60 during the 1960s, the M48 was the US's principal MBT used during the Vietnam War, where US Army and Marine units as well as South Vietnamese units successfully engaged NVA T-55s and PT-76s during the war's few tank versus tank encounters. The M48 saw further combat service in the Indo-Pakistani as well as Arab-Israeli wars where they performed well. Export customers were plenty, and included 18 different countries, notably NATO allies Greece, Norway, Portugal, Spain, Turkey, and West Germany, as well as Israel, Pakistan, and South Korea.

Design of the M48 started in 1950 and a prototype T48 was completed in late 1951. The turret was an extensive redesign of that featured in the M46 and M47s and had the commander's machine gun in an open mount rather than an enclosed cupola as became standard in the M48A1 and later variants. The M48A2 added various engine improvements as well as a new fire control system and a rear turret stowage basket while the M48A3 incorporated a new diesel engine along with further equipment and technology upgrades. Variants from the A1 to the A3 are also fitted with T-type blast deflectors for the main gun. A major modernization program took place during the in late 1970s in order to bring A1 and A3s in US service to M60 standards, mainly by replacing the original M71 gun by the M60's 105-mm gun along with other minor improvements. Known as the M48A5, most remained in reserve units. Similar upgrades have been undertaken on German units (M48A2GA2), as well as on Greek, South Korean, Iranian, and Israeli units. The M67(nicknamed Zippo) flame thrower tank was the only other main combat variant, and was used extensively by the USMC in Vietnam while a non-combat variant is the M48 AVLB Armored Vehicle-Launched Bridge. 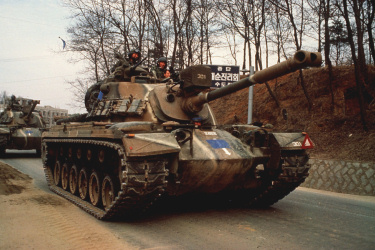