The M26 Pershing was the first heavy tank developed by the US, and the only tank from that country capable of defeating any German opponent at war's end. The M26 was the product of a long and convoluted development process which involved numerous prototypes and delays by US Army officials who felt the M4 Sherman was adequate for its needs despite it being increasingly outgunned on the battlefield. The M26 was designed with a cast turret and a hull which combined castings and rolled plate armor (of up to 100 mm thickness), while the chassis featured a torqmatic transmission and torsion bar suspension. It was the first US tank to be equipped with a 90-mm gun, giving it substantially greater penetrating power than the 76-mm equipped M4s that composed the bulk of US tank strength in the final months. Heavy Sherman losses resulted in a few hundred M26s being deployed to Europe, but combat was limited only the initial 20 vehicles deployed with the 3rd and 9th Armored Divisions. After the war, the M26 was redesignated as a medium tank and known as the M46 Patton, the first of four tanks to carry the name of the legendary World War II commander. Remaining M26s saw extensive action in Korea during 1950-51 and some were leased to Belgium, France and Italy as well.

The tank that eventually became the M26 went through a protracted development stage that included the production of numerous prototypes during which various different types of armament, engines as well as mechanical features. Eventually, the T26E3 was standardized as the M26 Heavy Tank, and a number of these were sent to Europe in late 1944. At the same time, the T26E2 was fitted with a 105-mm howitzer and later known as the M45. Other versions included the T26E4 Super Pershing with extra armor, this was followed post-war by the M26E1 with similar improvements. The M26E2 featured a more powerful engine, an improved M3A1 gun as well as other mechanical improvements and was later redesignated as the M46. Those remaining M26s refitted with the M3A1 became known as the M26A1. 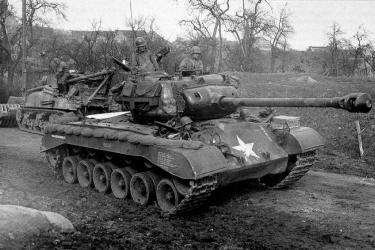