The need for a replacement for the M41 resulted in the development of the M551 Sheridan, the main US light tank during the second half of the Cold War. Officially designated an armored reconnaissance/airborne assault vehicle, the M551 was built with an all-aluminum hull and a welded steel turret, housing an 152-mm gun/launcher for the Shillelagh missile system. Despite the complexity of the missile, it was to prove a disappointment in service, and was rarely used in combat. The M551 was amphibious, using a flotation screen similar to the DD tanks of World War II, as well as air transportable from C-130, C-141, and C-5s. Sheridans were deployed to cavalry units in Vietnam during the final years of the conflict where they had mixed performance; on one hand, they had better cross-country performance than the larger M48s, but on the other, were highly vulnerable to mines and rocket-propelled grenades either of which could easily disable an M551 and kill its crew. By 1978 it had been retired from service although some remained with the 82nd Airborne Division which used it in Panama as well as the 1991 Gulf War. It was never exported.

The pre-production XM551 was completed in 1962, and was followed by the production M551 in 1966. An upgraded version with a new laser rangefinder (and later, a thermal gun sight as well) was known as the M551A1. After its retirement, many M551s were converted as mock Warsaw Pact vehicles for OPFOR exercises in Fort Knox, Kentucky. 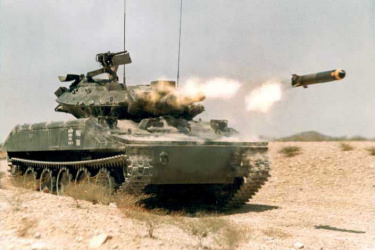