The M52 was a post-war 105-mm self-propelled gun which shared many characteristics with that of the M44, both of which were based on the chassis and hull of the M41 Walker Bulldog light tank. Unlike the M41, the engine compartment was located at the front, and the track system was notable for lacking the rear idler. The fighting compartment featured a fully-rotating turret, the first in a US SPG, with the driver located on the left. The main armament consisted of a 105-mm M49 howitzer which had a maximum range of 11.3 km, and aside from standard high-explosive rounds, the M55 could also fire anti-tank HEAT rounds if needed. Defensive armament was provided in the form of an M2 Browning machine gun and the all-welded steel armor could also provide protection against small arms. No NPC or amphibious capability was provided. The M55 entered service too late to see action during the Korean War and was replaced by the M108 in the early 1960s, by which time there was a preference for higher caliber (155-mm and over) weapons. Export customers included Germany, Greece, Japan, Jordan, South Korea, Spain, and Turkey, the latter which retains it in service (in upgraded form) to this day.

Development of the T98 began in February 1948 with an inital prototype completed in 1950 followed by the T90E1 which eventually became the M52. The M52 went through a similar upgrade process to the M44, with the M52A1 adding a fuel injection system which gave greater speed. The M52T is an upgunned version for Turkish service which features the same Rheinmetall 155-mm 39-caliber gun used on the German M109A3 as well as an MTU diesel engine. The higher recoil also necessitated the installation of a spade. 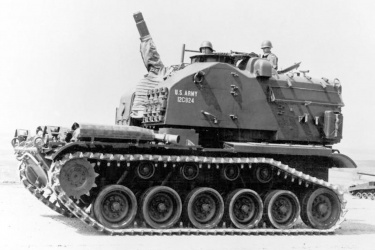