The M50 Ontos (Greek for 'thing') was one of the strangest armored vehicles of the Cold War, a futuristic-looking light tank destroyer that was based around six M40 recoilless rifles with a high rate of fire. It was meant to be easily air transportable, being originally designed for airborne units, although in the event these chose the M59 tank destroyers, leaving the M50 for the US Marine Corps. The rifles were mounted coaxially on the sides of a small, unmanned turrent and could fire individually, in pairs, or all six simultaneously. Given the size of the vehicle only a limited amount of rounds could be carried (18), these typically being HEAT rounds which could penetrate most enemy armor of the 1950s. Secondary armament included one 7.62-mm machine gun plus two 12.7-mm spotting rifles which fired tracer ammunition in order to aim the main guns. Armor protection was kept to the minimum and provided protection against small arms. The layout of the vehicle also mean that the crew needed to dismount in order to reload the guns, which increased vulnerability. Mechanically, the Ontos was a small and relatively simple vehicle, powered by a commercial engine but which gave relatively good performance, allowing it to keep up with tanks. Unfortunately, the M50 was built in small numbers and rarely fulfilled its role as a tank destroyer, aside from an incident in which two AMX-13s were destroyed during the 1965 US invervention in the Dominican Republic. Nevertheless, the M50 was used extensively in Vietnam as a static infantry fire support vehicle, a role in which it excelled. Most were retired at the end of the end of the conflict, and it was never exported although the M40 guns would be used in the Japanese Type 60 tank destroyer.

Two different prototypes were built before the first M50 was rolled out in 1956. An improved engine and transmission was installed in the M50A1, the only variant of the vehicle that was ever in service aside from prototypes of an APC which were never adopted given its small size. 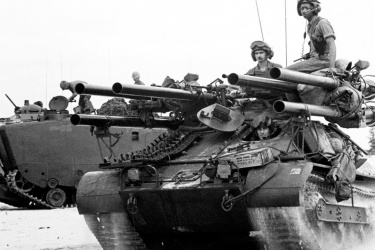