The M60 was the fourth in the line of Patton tanks (albeit never officially christened as such) and a significant improvement over its direct predecessor, the M48. This was mostly due to the incorporation of a license-produced version of the successful British 105-mm L7 gun in an all-cast-steel turret. This gave it sufficient firepower to penetrate the latest Soviet armor during its day but like the British Chieftain, the M60 spared no expense in protection either in contrast to the preference for speed and mobility seen in in its other NATO contemporaries, the Leopard 1 and AMX-30. The result was a well-balanced tank whose main defect was an noticeably high profile although this was partly offset by its lower gun depression compared to Soviet tanks. Over its service life, the M60 received numerous equipment upgrades enabling it to remain viable well into the 1990s by which time it began being replaced by the M1, first in US Army service and later, with the US Marines (who used it during the 1991 Gulf War). Additionally, it was one of the only US tanks to ever be fitted with a missile-launcher system. M60s were highly successful on the export front, serving in 22 different countries of which Israel, Turkey and Egypt remain the largest users, the latter with over 1,700 examples received. NATO clients included Greece, Italy, Portugal and Spain.

Development began in the mid-1950s, and the prototype XM60 was produced in 1959, entering service the following year as the M60 with the same turret as the M48. Two years later, the M60A1 introduced a redesigned elongated turret with greater ballistic protection. This was followed by the radical M60A2 Starship, which featured a flattened turret equipped with a 152-mm M162 gun firing the Shillelagh missile. Despite the futuristic aspect of this variant, performance was disappointing and it was decided to revert to a conventional tank format in the M60A3, the last and definitive MBT variant. This included a new fire control system incorporating a laser rangefinder and a solid-state computer. Plans to add an ERA package to this version fell through but it was later decided to provide them to USMC M60A1s; these were used during the Gulf War shortly after which all M60s were retired from active US service. Other variants and upgrades include a mine roller system, the M9 bulldozer kit, the M60 AVLB Armored Vehicle-Launched Bridge, and M728 CEV Combat Engineer Vehicle. Modifications undertaken by export customers include Israeli Magach 6/7 (with extra reactive or passive armor) as well as the Sabra for Turkey, and the Iranian Samman with Russian-supplied ERA. 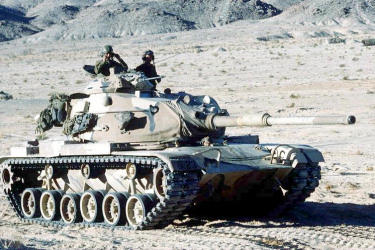