The LAV-25 is one of the many successful developments of the Swiss MOWAG Piranha family of wheeled APCs (specifically, the Canadian-built version known as the Cougar). Originally intended for service by both the US Army and US Marines, it was eventually only adopted by the latter. Its main advantage over the tracked vehicles favored at the time by the US Army, was greater mobility and faster road speed as well as a cheaper cost and ease of maintenance. It is able to carry as many as six fully equipped marines who can dismount through a pair of rear doors and who are offered an equal number of firing ports on the sides of the troop compartment. The LAV-25 is powerfully armed for an APC as it incorporates the same turret fitted on the Army's M2 Bradley. This houses a 25-mm M242 Bushmaster cannon, but lacks the Bradley's TOW missile launcher. As expected for a USMC vehicle, the LAV-25 is fully amphibious thanks to a pair of propellers in the rear hull, and can be airlifted by all medium and heavy US transports, as well as CH-53E helicopters in the sling position. First use of the LAV-25 in combat was during the 1989 Panama invasion, after which it saw action in the 1991 Gulf War, the Somalia intervention, and the subsequent wars in Afghanistan and Iraq. Export clients include Australia and Saudi Arabia, while Canada has adopted the similar LAV III. Despite the US Army's initial rejection of the LAV-25, it later adopted a more lightly armed but more heavily armored version of the Piranha known as the Stryker.

The LAV-25 was born out of a competition between the UK Alvis Scorpion and Stormer, the Cadillac V-150 Commando, and the Cougar built by General Motors of Canada, the latter which emerged the winner. Initial production versions entered service with the USMC in 1983 and the last was delivered four years later. Over time, the basic LAV-25 has been fitted with various appliqué armor kits, upgraded engines, as well as more advanced sights (including thermal sights for night operations). A Service Life Extension Program (SLEP) was also begun in 2000. Other variants include the LAV-AT anti-tank missile platform, LAV-C command and control vehicle, LAV-R maintenance/recovery vehicle, LAV-L logistics platform, and LAV-M mortar carrier. Additionally, the LAV-MEWSS is a LAV-25 fitted with an electronic warfare support system. 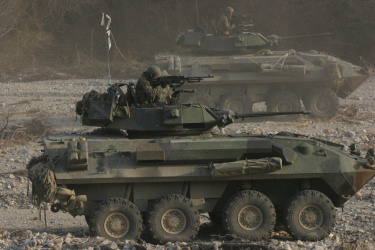