The Vought (later Lockheed Martin) M270 Multiple Launch Rocket System (MLRS) is the principal multiple launch rocket vehicle employed by NATO. It was developed after decades of general neglect of rocket artillery by the US and its allies in contrast to Soviet doctrine of area fire rocket barrages that despite their lower accuracy compared to artillery, could saturate enemy defenses. The result was a multi-national effort which led to the M270. The M270 is based on the M993 chassis, itself a stretched version of that of the M2 Bradley with space for the three-man crew in an enclosed cab in the front. The rear of the vehicle mounts a M269 Loader Launcher Module (LLM) which also includes a computerized fire-control system, stabilization system, and a twin-boom crane for loading. The M270 can fire two kinds of projectiles, these being standard 227-mm rockets or the ATACMS (Army Tactical Missile System) surface-to-surface missile which has a range of over 100 km. These are loaded through two interchangeable pods each of which can house either six rockets or one ATCM missile. This was sufficient to blanket an entire square kilometer. Later improvements also allowed the M270 to fire guided rockets. The M270 is also air-transportable and can be carried by a C-130. The M270 was immediately deployed to Europe following its introduction in the early 1980s where it was complemented by other MRLS units from NATO allies, notably France, Germany, Italy and the UK which also contributed to its development. It would also be adopted by another dozen armies including Israel, Japan, Saudi Arabia, and South Korea effectively turning it into the standard MLR of the Western world. The M270 has seen action during the 1991 Gulf War (where over 230 were deployed) as well as the Afghanistan and Iraq Wars. Over 800 vehicles remain in US Army service although it has since been replaced by the M142 HIMARS with the USMC.

Development of the M270 began in 1976 with first deliveries to the US Army in 1983, the same year in which production for European partners began with Aerospatiale (France), Diehl (Germany), SNIA BPD (Italy) , and Hunting Engineering (UK) being part of the consortium. The M270A1 was the first major upgrade with an improved fire control system and faster launch in addition to the ability of firing GPS-guided munitions. A further upgrade with more advanced electronics is known as the M270D1. Foreign variants include the M270B1 which is a similar upgrade to the M270A1 for the British Army with additional armor protection against IEDs, while the MARS2 is an upgrade to French, German, and Italian vehicles which enables firing of 110-mm rockets. 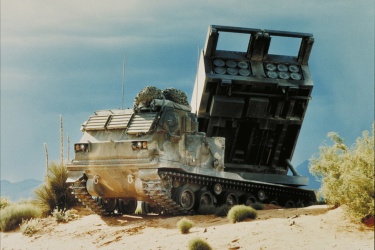