The M10 Wolverine was the first truly successful US tank destroyer of World War II, a marked improvement over the M3 GMC that it replaced. The M10 used the chassis the M4 Sherman, and had good armor protection thanks to a low-profile hull that was prominently sloped at both the front and the sides. The five-sided turret, with its characteristic counterweight at the rear, was armed with a 3-in M7 gun which gave it more than adequate penetrating power during the mid-war years, but became increasingly less effective when encountering Panthers and Tiger IIs. Additionally, the open-topped turret did not offer the crew protection against shell fragments but compensated with excellent visibility. Despite these drawbacks, the M10 became the most widely produced tank destroyer in US service and was used extensively by the British as well (where they were fitted with a far more powerful 17-pounder gun). Combat use began during the Tunisian campaign in 1943 and it was used in large numbers in Italy and Northwest Europe (and to a lesser extent, the Pacific) before being complemented by the M18 and M36, the latter which used the same hull.

The prototype T35 involved fitting a 3-in gun on the an M4A1 hull. Resign of the turret into its definitive sloped shape resulted in the T35E1 that was then redesignated 3-in Gun Motor Carriage M10, which was based on the M4A2 chassis. The only major variant was the M10A1, based on the M4A3 chassis and had the original diesel replaced by a gasoline engine. The M35 was a turretless M10A1 used as an artillery tractor, while British vehicles were known as Wolverine, and those fitted with a 17-pounder gun as Achilles (these are described separately). 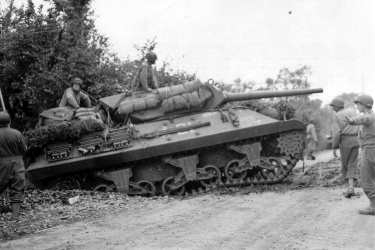