Following its resounding success in the Gulf and Iraq wars, the M1 Abrams has established itself as one of the most successful tanks of all time. It was originally developed in the early 1970s following the failure of the joint US-West German MBT-70 project which left the US in need of a successor to the venerable M60. Designed to counter the latest generation of Soviet armor, it boasted feature that are now standard in Western third generation tanks, such as advanced composite armor (it was the first tank to use British-developed Chobham armor), a large angled turret with blow-out panels for the ammunition compartment, and a powerful gun capable of firing a variety of US and NATO ammunition, including depleted uranium rounds. It also featured a gas turbine which gave the 70-ton vehicle outstanding speed and a large power-to-weight ratio. The M1 was originally designed with a US-built variant of the British L7 105-mm (the same as the M60), though it was later decided to upgun it with the Rheinmetall 120-mm gun which is also standard on the Leopard 2. Depleted uranium was also added to its already formidable armor. Unlike most Russian tanks, the M1 did not traditionally use explosive reactive armor (ERA) or active protection systems though newer variants can be equipped with ERA, slat armor, and some have adopted the Israeli-built Trophy system. The M1 was first put to the test in the 1991 Gulf War where nearly 2,000 served. None was lost to enemy action, being practically invulnerable to the Iraqi knocked-down T-72s which in turn were easily destroyed thanks to the M1's "Silver Bullet" M829A1 depleted uranium round (more modern versions of the round like the M829A4 are designed to defeat the most advanced Russian ERA). The story subsequently repeated itself during the Iraq War as the tank was tested even further in urban combat; some tanks have received a special Tank Urban Survival Kit (TUSK) to address vulnerabilities. Despite its performance, the M1 has had only modest export success (particularly compared with its rival, the Leopard 2), having received no NATO orders but serving with the militaries of Australia, Kuwait, Iraq, Saudi Arabia, and Egypt which has received over 1,000 units. Egyptian M1s participated during the country's 2011 revolution, while Saudi M1s have also been active in the Yemen Civil War

The XM1 program began in 1971 and prototypes from Chrysler and Detroit Diesel were tested out in 1976, with the former winning the contract of what became the M1. These featured the British 105-mm L7 rifled gun, the same fitted on the M60. Additional frontal armor was provided in the Improved M1 (IPM1) but production soon switched to the M1A1 which was the first to be equipped with the now standard Rheinmetall 120-mm gun (produced locally as the M256). This also featured a new NBC system as well as numerous automotive and equipment upgrades, and was the main variant to serve in the 1991 Gulf War. Some of these received additional depleted uranium armor and were known as the M1A1(HA). Shortly thereafter, production began on the M1A2, which featured further armor protection as well as a myriad of equipment and electronic upgrades, including GPS navigation as well as an inter-vehicle information system. Most M1A1s have seen been brought up to A2 standards (standardization of M1 variants is undertaken as part of the M1A2 SEP program), and despite not being used during the initial combat phase of the Iraq war, has been the mainstay of US forces in the theater since. The planned M1A3 is expected to enter service early in the next decade and is reported to include a diesel engine. Non-combat versions include the M104 Wolverine Heavy Assault Bridge (HAB), and the M1 ABV (Assault Breacher Vehicle) for use by the US Marines. 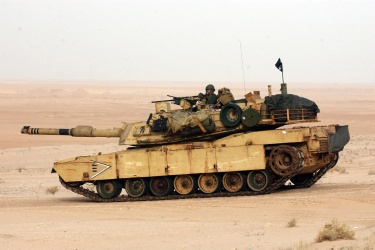