The M2/M3 Bradley was the first US IFV to enter service, around a decade and half after the Soviets introduced their BMP series and also a decade after numerous NATO allies developed their own. Despite this delay, the M2/M3 proved to be a highly capable design that has served with distinction in the US's post-Cold War conflicts. The different designations reflect its role as an infantry (M2) or cavalry fighting vehicle (M3), the latter carrying more ammunition at the expense of a reduced troop load though externally they are nearly identical. Like the vehicle it was intended to replace, the M113, the Bradley is built with lightweight aluminum but this can be strengthened with appliqué steel plates as well as explosive reactive armor (ERA) during combat operations. The turret houses a 25-mm Bushmaster chain gun which is complemented by a twin TOW anti-tank missile launcher, which compensates for the relatively weak punch of its main armament compared to rival (notably Russian) designs. Up to seven infantrymen (five in the M3) can be carried in the rear troop compartment, which is accessible via a hydraulically-operated ramp although a roof hatch is also provided. Six firing ports are also provided in early M2 variants. The vehicle is fully amphibious through an erectable water barrier and features NBC protection as well; in addition it can be airlifted by C-5, C-141 and C-17s. Newer versions have featured a host of electronic improvements to its fire control system as well as communications. The Bradley has seen extensive combat in the 1991 Gulf War and 2003 Iraq War, where they formed the backbone of the US's mechanized infantry brigades; its speed enabled it to keep pace with M1 MBTs, a crucial advantage compared to the older M113. Despite its success on the battlefield, the only export customer has been Saudi Arabia and a small number to Lebanon.

A series of unsuccessful prototypes eventually led to the XM723 in 1972, this would eventually become the M2 and M3 once amphibious capability and TOW missile launchers were added. Both versions of the Bradley are broadly similar, but troop capacity is reduced in the latter in order to provide additional ammunition storage. The M3 also lacks the firing ports for the troop compartment. The M2A1 and M3A1 were developed just a few years after initial production began, and featured a new NBC protection system along with other minor structural and layout improvements (the M2A1 also has a new Dragon night sight). Further survivability enhancements led to the M2A2 and M3A2 which also incorporated a redesigned water barrier. A high-survivability kit was subsequently offered to all variants and includes passive armor, while otherwise bringing A1 units to A2 standard, whereas experience from the Gulf War resulted in the M2A2/M3A2 ODS with a laser rangefinder, GPS positioning, IFF capability. The most recent modernization is the M2A3 and M3A3 which provide numerous upgrades to the electronic systems, making it fully digital. The planned M2A4 (not yet in production) will add new automotive components to compensate for the vehicle's gradually increasing weight. Armor, fire control and equipment upgrades are also included, but the M2A3 carries one less infantryman. Other variants include M4 C2V command and control vehicle, the M6 Bradley Linebacker Stinger-missile platform, while its chassis forms the basis of the M270 MLRS, NATO's main rocket artillery system. 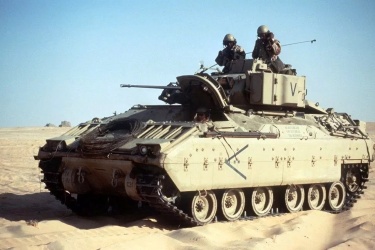