The M108 105-mm self-propelled gun was designed concurrently with the M109 as a lighter variant of the same basic design. Both vehicles were based around the same chassis and turret which were built of all-welded aluminum. The main difference between the two was the gun, which was an M103 105-mm howitzer capable of a three round-per-minute burst or one round-per-minute sustained fire and a range of 11.5 km with normal rounds and 15 km with rocket-assisted rounds. Despite the similar turret design, the M108 featured a completely different mount for its gun (designed with a hydrospring rather than hydropneumatic recoil system) as well as different fire-control equipment. Aside from that, structurally the M108 and M109 were nearly identically, lacking NBC equipment and with amphibious capability provided optionally through a kit. The M108 had its combat debut in Vietnam in 1966 where its full traverse made it particularly effective at defending fire bases against attacks coming from multiple directions. However, it was soon decided that 155-mm artillery was more suitable for modern warfare and it was retired in 1975. Numerous foreign users adopted it, notably Belgium, Brazil, Spain, Taiwan, Turkey, and Tunisia as well as Australia on loan during the Vietnam War.

The first prototype T195 was completed in 1958, and switched from a gasoline to diesel engine in the T195E1 which was used in the production M108. No major variants were built although a number of Belgian Army vehicles used their M108 turrets on surplus M109 hulls for training, resulting in the M108A2B. 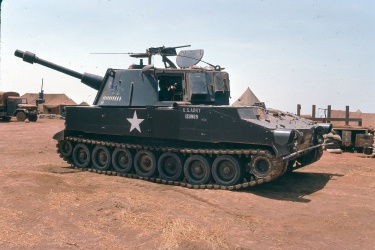