The M41 Walker Bulldog was designed as a replacement for the venerable M24, the US Army's standard light tank since World War II. Together with the M47 medium tank and the M103 heavy tank, it helped complete the full spectrum of the US Army's armored strength during the 1950s, before the development of main battle tanks. The M41 featured a welded hull and a part welded, part cast turret housing a 76.2-mm M32 gun with a bore evacuator and a T-type blast deflector. Like many US AFVs at the time, the hull had an escape hatch for the crew. Amphibious capability, however, was not included, nor was NBC protection. The M41 arrived in time to serve briefly during the latter part of the Korean War, but was later used extensively by South Vietnam forces during the Vietnam War. Additionally, it was exported to at least a dozen other countries, which included Spain (the only NATO client), Taiwan, Thailand, and numerous Latin American countries such as Brazil, Chile, Dominican Republic, and Guatemala. Although it was eventually replaced by the M551, the M41's chassis became the basis for numerous other US Army vehicles.

Work began on the T37 shortly after World War II, resulting in three separate models of which the T41 (later T41E1) would be chosen for production as the M41. It was originally called the Little Bulldog, but the death of General W. W. Walker in Korea resulted in it christened Walker Bulldog instead. Addition of a hydraulic turret traverse resulted in the M41A1 which also had larger ammunition storage capacity, while a new fuel injected engine was fitted in the M41A2 (A1s upgraded to this standard became known as the M41A3). Numerous local upgrades have been developed by export clients, these adding improvements such as NBC protection, appliqué armor and side skirts among other equipment such as night vision sights and laser rangefinders. Components of the M41 have been used in the M42 Duster anti-aircraft platform, as well as the M44 (155-mm) and M52 (105-mm) self-propelled guns. 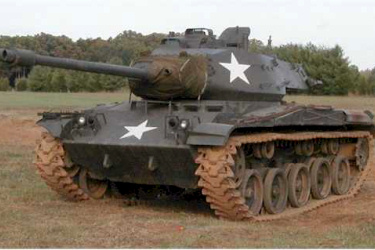