The M36 Jackson was the last and most powerful tank destroyer designed by the US. It was the first major US combat vehicle to be equipped with the 90-mm M3 gun, the only US gun capable of defeating late-war German armor at long range. This was to be fitted on the same hull as the M10, but the extra size and weight of the M3 gun required the turret to be redesigned with a rounder shape while retaining the prominent counterweight at the rear (which could also fit additional ammunition). The M36 was rushed into service in Northwest Europe in the autumn of 1944, where it complemented (but never replaced) existing M10 and M18s, and gave a good showing against the German tanks and assault guns it faced. It was also used extensively during the Korean War by which time the turret had been fitted with an armored roof, something that had been absent on previous US tank destroyer designs. It was also exported to numerous countries including the former Yugoslavia, where it was in action during the civil war by both Croatian and Serbian forces. They were also used by the French in Indochina and by Pakistan in the Indo-Pakistani war of 1965.

The prototype T71 was built in early 1943 by fitting the 90-mm M3 gun on an M10 chassis (itself based on the M4 Sherman). This was then standardized as the 90-mm Gun Motor Carriage M10. The only variants were the M36B1 which had the M3 gun directly installed on a M4A3 hull, while the M36B2 used the hull of the M10A1 and was powered by a GM 6046 diesel. These represented around a quarter of total production. 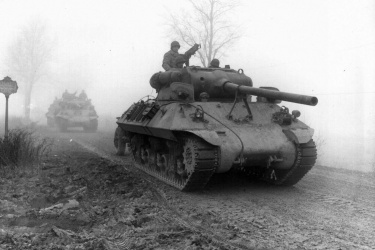