The LVT-2 Water Buffalo was, along with the modified LVT-4, the most widely used of the USMC's amphibious tractors (amtracts) that saw widespread service in the Pacific theater. The LVT-2, like its predecessor, was unarmored and was intended for use as a ship-to-shore cargo transport. However, it featured numerous improvements to the basic LVT-1 design, developed from experience by FMC which had also contributed to the LVT-1's production run. Notably, the LVT-2 featured a torsilastic suspension, whereby the road wheel arms were held on shafts mounted inside rubber-filled tubes. This gave it significantly improved performance on hard terrain. Additionally, the track grousers (which were used to propel the vehicle on water) were bolted on which allowed them to be replaced easily after being worn out. Eventually, the hull was modified by moving the rear engine to the front, this resulted in the LVT-4 with a rear loading ramp. Certain variants were also fitted with various types of armament including a 37-mm M6 gun and a 75-mm M8 howitzer. First used during the invasion of Tarawa in 1943, LVT-2 and -4s were used in most US amphibious operations in the Pacific where they could carry up to 30 fully loaded troops, a jeep, an anti-tank gun, or more than 4 tonnes of cargo. They were also used, to a lesser extent, in some amphibious operations in Northwest Europe by both US and British forces, notably in the Scheldt estuary and the Rhine crossings. Some were exported after the war to Taiwan and Thailand and remained in service decades after.

The LVT-2 was developed directly from the LVT-1 by FMC, which had also produced the latter. The basic model was unarmored, but this was changed in the LVT(A)-2 which featured armored plating but remained unarmored. Despite its confusing designation, the LVT(A)-1 was also a derivative of the LVT-2 and incorporated a 37-mm M6 gun in a turret that was nearly identical to that of the M3. Relocation of th engine to the front along with the introduction of a rear ramp resulted in the LVT-4, which was otherwise similar to the -2 and also featured an armored variant known as the LVT(A)-4 which was also fitted with a 75-mm M8 howitzer. A final variant with stabilization and power traverse was designated LVT(A)-5. Secondary armament varied depending on version, but usually involved various machine gun configurations on open or shielded mounts. British lend-lease units were known as the Buffalo II (LVT-2) and Buffalo IV (LVT-4). 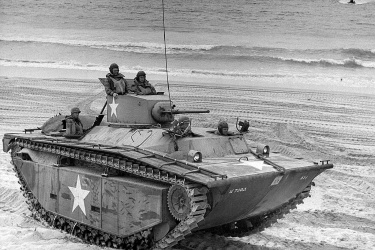