The Red Army has been almost synonymous with armored warfare thanks to its victories in the great tank battles of the Eastern Front (such as Kursk) during World War II. Later, tens of thousands of Soviet tanks were ready to spearhead the Warsaw Pact's assault on NATO had the Cold War turned hot. Although the Iron Curtain may have fallen, Russia maintains its position as one of the great tank powers of the world today although the war in Ukraine has shattered much of its hype.

Russia lagged behind the West with regards to tank development during World War I as its participation was cut short following the Brest-Litovsk Treaty. Instead, armored warfare first saw the light of day during the Russian Civil War although it would still take a while before the first tanks were developed indigenously (and most of these were close copies of British and French designs). The USSR was a strong proponent of tanks, in line with its military leaders’ beliefs in operational warfare. As a result, tank development and production took on a tremendous importance during the 1930s to the point that at the start of World War II, the Red Army had more tanks than the rest of the world combined.

Unfortunately, tank quality varied sharply, and the grand majority of tanks were obsolescent designs such as the T-26 that were little match for Germany’s battle-hardened panzers after the 1941 invasion. Fortunately, the Red Army had a major ace up its sleeve in the form of the T-34, arguably the finest tank of the war, and built in enough numbers to swamp the Germans. Over the course of the war, Soviet tanks were demonstrably superior to their Western counterparts, offering simplicity in design and good combination of mobility, protection and firepower. And by the time German tank development overtook that of the USSR in qualitative terms around 1943-44, the Red Army was on the offensive and would never cede the initiative. The Red Army also profited extensively from US and British supplies provided under lend-lease. Although many of their Allies’ tanks were seen as inferior and relegated to secondary duties, the provision of trucks and jeeps gave the Red Army the mobility it needed to launch its great offensives in Byelorussia, Poland and finally Berlin.

Despite suffering enormous casualties, the Red Army ended World War II as the largest and most powerful in the world. During the Cold War, the USSR maintained an offensive posture against NATO, with dozens of tank divisions poised to smash through the Alliance's numerically inferior forward defences in Central Europe. The Red Army fully motorized in the 1950s and later became a pioneer in the development of the infantry fighting vehicle, a decade and a half before the US fielded its own. The T-55 still holds the distinction of being the most widely produced tank in history and along with the T-72 has been ubiquitous in many of the conflicts fought by Soviet client states, particularly in the Middle East. Unfortunately, the Red Army’s qualitative edge faded away in the late 1970s in the face of the West’s new third-generation tanks and other technologies. Furthermore, the dissolution of the USSR forced a major downsizing of the Russian army’s armored and mechanized strength compared to Cold War levels. Despite a major modernization drive in the 2010s and the development of many new combat vehicles such as the Armata series, the war in Ukraine has exposed the vast gap in capability that remains between the Russian army and its equipment compared to its Western rivals.

There are currently 76 entries and data on 116 variants. 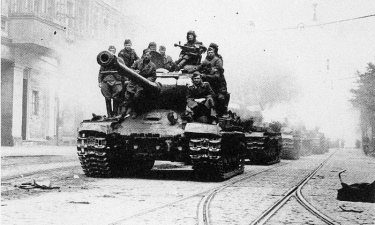 The Red Army's armored juggernaut rolls into Berlin during the dying days of World War II. 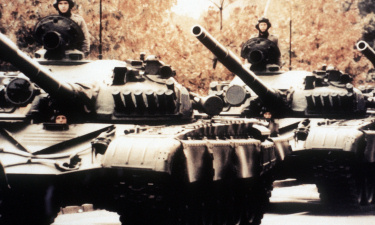 The Warsaw Pact's armored might on display, ready at at any time for a war against NATO.