The BTR-60 was the third in the BTR series of Soviet APCs, designed to replace the BTR-152 given its lack of amphibious capability. The BTR-60 introduced the now standard layout of an 8 x 8 personnel carrier, although in its initial production versions had an open-topped troop compartment (capable of carrying as many as 16 troops and fitted with three firing ports) located behind the crew. Amphibious capability is afforded thanks to a single rear-mounted water-jet but NBC protection was only provided in later variants, once an armored roof had been added to protect the troop compartment. When it entered service in the 1960s, the BTR-60 was used primarily to equip Soviet motor rifle units, whereas tank units were equipped with the tracked BMP-1 or BMP-2. As was the case with most Soviet APC, it was widely adopted by Warsaw Pact allies and client states, and has seen extensive combat although usually in a support role. The War in Afghanistan highlighted shortcomings in the design, such as weak armor, unreliable engine in non-temperate environments, and poor gun elevation, many of which were addressed in the BTR-70. Although most have since been retired from front line service, many still operate as part of internal security forces, border police and other paramilitary units.

The BTR-60P was the initial production variant with an open troop-compartment and was adapted into various other roles including command vehicle, fire support vehicle, and mortar carrier. The BTR-60PA was the first to feature an armored roof as NBC protection. Later, the BTR-60PB added provisioning for a turret housing a 14.5-mm main machine gun and a co-axial 7.62mm machine gun. There are also improvements to the telescopic sights as well as numerous roof-mounted periscopes. A command vehicle variant is known as the BTR-60PU while the MTR-2 is a repair vehicle. Private modernizations by Russian companies include the BTR-60PBM and MWS. Local variants are too numerous to list but include the East German SPW-60P series and the Romanian TAB-71 with twin 140-hp SR-225 gasoline engines. 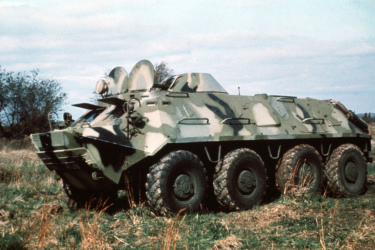