The SU-85 was the Soviet Union's first true tank destroyer, designed to carry a gun capable of taking on the new generation of German tanks like the Tiger and Panther that the T-34/76 was finding much more difficult to defeat. Development of the SU-85 was hastened thanks to the use of the existing SU-122 assault gun (which was itself based on the T-34) as a basis. Rather than a 122mm howitzer, however, the SU-85 mounted a powerful 85mm D-5 gun, which was based on an existing anti-aircraft gun and had considerably superior penetration power than the 76.2mm of the T-34. However, no secondary armament was provided. Being a derivative of the legendary Soviet tank, the SU-85 also inherited its excellent speed and mobility, and could also be fitted with external fuel tanks on the sides to increase combat range. Great efforts were made to rush the SU-85 into production during the second half of 1943 and it participated in numerous Soviet offensives from that point onwards. Production eventually ceased, however, in favor of the T-34/85 (which was armed with the same gun) as well as its direct successor, the SU-100, which was essentially the same vehicle but armed with a much more powerful 100mm gun.

The SU-85 was designed by a team led by L.I. Gorlits and General F.F. Petrov to fulfill a requirement for an easy to build and highly mobile tank destroyer. Trials took place in August 1943 and production commenced thereafter. No variants were built but later vehicles had numerous improvements such as a special cupola for the commander. 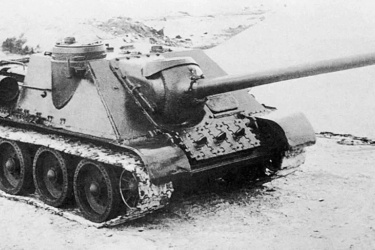