The BTR-T was the first attempt to create a heavy infantry fighting vehicle to be used for urban combat. The need for a heavily armored IFV was seen as necessary following the experience of the Chechen Wars were standard IFVs and APCs were frequently knocked out by infantry during street fighting. It may have also been inspired by the Israeli Achzarit IFV, which was based on captured T-55 hulls. Like the Achzarit, tThe BTR-T was designed from the T-55 chassis of which many were avilable following the post-Cold War downsizing of the former Soviet army. This was extensively modified by raising the hull in order to provide room for the troop compartment which could fit up to five infantrymen. The turret was also removed, in its place was a small remote controlled turret for a 30-mm autocannon, with a separate pintle mount for a 9M113 ATGM launcher. Other armament configurations could also be installed including AGS-17 grenade launchers, twin autoccanons, or 12.7-mm machine guns. Augmenting the hull's protection is the use of explosive reactive armor (ERA) and NBC protection was also provided. However, amphibious capability was not provided though ti was capable of fording small rivers.

The BTR-T was first observed in a in 1997 defense exhibition. It is unclear whether any different variants have been built, though it is known to have the different armament configurations mentioned above. 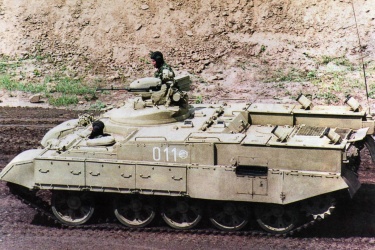