The PT-76 (Plavaushiy Tank) is an amphibious light tank that has been in service for over six decades. It is the result of a post-World War II requirement for a pair of amphibious vehicles (the other being an APC that would become the BTR-50) that would share many of the same automotive components. The boat-like hull is built of welded steel and features a traditional layout, with the driver at the front-center, behind which is a turret housing 76.2-mm D-56TS rifled gun (the same fitted on the wartime T-34/76) and the engine at the rear. Amphibious capability is provided through two water-jets mounted at the rear of the hull and preparation requires minimum crew effort. The P-76's drawbacks included lack of NBC protection in its initial variant as well as weak protection that makes it vulnerable to anything from .50-in ammunition onward. Nevertheless, the PT-76 was the main reconnaissance tank in Soviet service until it was replaced by more capable IFVs, although these generally lacked the PT-76's stronger armament. Like most post-war Soviet armored vehicles, the PT-76 was heavily exported and saw extensive combat with its foreign operators, notably the NVA during the Vietnam War, India during the Indo-Pakistani wars and Egypt in the Arab-Israeli wars of 1967 and 1973, among other conflicts. It has also been used in Yugoslavia and Chechnya.

The basic PT-76 (Ob'yekt 740) entered service as early as 1950 and featured an older D-56T gun with a multi-slotted muzzle brake. Production then moved on to the PT-76B, which incorporated the D-56TS gun with a two-axis stabilizer as well as a raised hull and lengthened bow for improved buoyancy. It could also be fitted with two auxiliary fuel tanks and had an NBC protection system installed. A version armed with an 85-mm gun and a cast turret was known as the PT-85. More recently, the PT-76E is the latest modernization featuring a 57-mm autocannon and more powerful engines taken from the BMP-1. The PT-76's chassis has been used for many other vehicles including the BTR-50 (developed simultaneously with it) and the ASU-85 airborne assault gun, while its components have been used in numerous other anti-aircraft and SAM platforms. Export variants were generally substantially revised from their Soviet originals, and include the Chinese Type 63, the North Korean PT-85 (Type 82), as well as the Israeli PT-71 from captured Egyptian stocks and which is armed with a 90-mm Cockerill gun and more powerful engines. 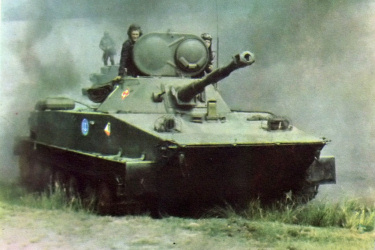