The T-26 was a Soviet version of the British Vickers 6-ton twin-turreted tank albeit with numerous modifications that set it apart from the original. As an intrinsic component of the Soviet pre-war doctrine of the Deep Battle, the T-26 was designed to fulfill the role of infantry support following a breakthrough of enemy defenses. Visually, the T-26 bore a strong resemblance from the Vickers tank but initial versions featured a plethora of different armament configurations before this was standardized. These went from the initial twin-turreted 7.62-mm machine gun design into much more efficient single-turreted variants which were first equipped with a 37-mm and later a more powerful 45-mm M1932 gun. Armor was initially think and could only protect against small arms fire but this was gradually increased (but never more than 25mm maximum). However, the riveted armored proved inherently weaker and so later variants adopted welded armor instead. Despite this, speed was unspectacular for a light tank (it was slower than the T-28 medium) on account of an underpowered engine which was nevertheless slightly uprated over the years. Cross-country performance was also poor. The T-26 was first tested in combat during the Spanish Civil War where it had mixed results, mostly because of poor communication with the infantry it was designed to support. Improved tactics resulted in better performance during the border conflicts with Japan in Lake Khasan and Khalkin Gol, but by the time of the 1939-40 Winter War with Finland, the T-26 had been clearly outclassed on account of its weak armor. Large stocks of T-26s were still available during the German invasion in 1941 and suffered substantial losses (often due to mechanical failure) although its gun was still adequate at defeating most German tanks at the time. T-26s were gradually retired from front-line service as new designs became available but special purpose variants were in use throughout the war.

A Vickers 6-ton tank was purchased by the Directorate of the Mechanization of the Red Army (UMM) in 1929 was was tested against various Soviet-designed prototypes known as the TMM-1 and TMM-2, but the Vickers proved superior. License production (with modifications) therefore began as the T-26 Model 1931 (also known as the T-26A). Initial models retained the twin-turreted design of the Vickers but the Model 1933 featured a single turret mounting a 45-mm M1933 gun. Welded armor replaced the riveted design by mid-decade and late version of the Model 1933 (T-26B) also had additional secondary machine guns. In 1937, the T-26S was conceived with thicker frontal and turret armor while the later T-26S Model 1939 had a sloping hull and an uprated engine. Other varints included the OT-26 flamethrower, ST-26 combat engineer vehicle, T-26T artillery tractors, TT-26 remotely-controlled tanks, as well as numerous other experimental variants and transportation vehicles. 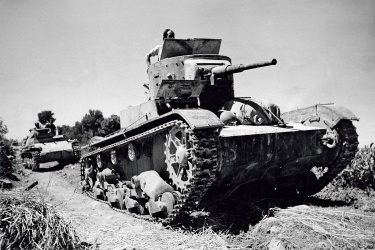