The T-72 has been one of the most widely produced Soviet tanks of the Cold War, second only to the T-54/55. It was designed as a simplified version of the T-64 and intended to fill the ranks of the USSR’s dozens of tank divisions that could not be equipped with its more expensive and sophisticated predecessor. Additionally, it would be provided for export to Soviet client states. The T-72 was of typical Soviet tank design, retaining the small silhouette, autoloader, and missile-firing main gun, albeit the more powerful 2A46 that would continue to be used on the later T-80. Throughout the T-72’s service life, numerous upgrades were undertaken such as improved fire control and designation systems, as well as use of composites and ERA for boosting protection. It was also capable of deep fording with the addition of a snorkel fitted above the gunner’s periscope hatch. Because of their cheaper cost, T-72’s were heavily exported to most Warsaw Pact and communist armies, many of which built them domestically. These, however, were often of inferior quality, lacking features such as NBC protection and laser rangefinders. As a result, they often fared poorly against Western tanks, notably in the 1991 Gulf War where Iraqi-built T-72s were decimated by Coalition M1 and Challenger 1s. Better performance was seen, however, against their second-generation contemporaries, such as the M60 and Chieftain during the 1982 Lebanon War and the Iran-Iraq War where the T-72s gave a good account of themselves. With other 19,000 built, the T-72 is likely to still figure prominently in future conflicts and will be continuously improved, often through the installation of Western equipment.

The original T-72 (Ob’yekt 172M) entered service in 1973 featured the D-81T smoothbore until replaced by the superior 2A46 in the T-72A, the first major comprehensive upgrade. This variant also featured added protection in the form of composite armor on the turret as well as ERA. Downgraded export versions were known as the T-72M and included many of the Iraqi units in the Gulf War (T-72M1). The next key variant was the T-72B, designed to bring the tank to T-80 standards with improved fire control and even heavier armor upgrades as well as the ability to fire the AT-11 missile. It also featured an uprated engine while sub-variants were capable of being fitted with Kontakt-1 ERA on the glacis plate, turret and side skirts. Export versions of the T-72B were known as the T-72S. Further development led to the T-72BM with new engine, second-generation Kontakt-5 ERA and upgraded gun, while the T-72B3, the most recent post-Cold War variant adds a new ballistic computer and night/day all-weather capabilities. It was first delivered to combat units in 2013. The T-72BU was also the first name given to what became the T-90, and is covered in a separate entry. Domestically-built versions of the T-72 by client states were mostly based on the T-72M and its derivatives. Among these the most notable were the Iraqi Asad Babil (Lion of Bablyon), the Polish PT-91, the Romanian TR-125, and the Indian Ajeya Mk.1 and Mk.2. Most of these were extensively fitted with local components. Non-tank variants include the BREM-1 armor-recovery vehicle, TOS-1 multiple rocket launcher, IMR-2 combat engineering vehicle, and MTU-72 bridge-layer. The BMPT support vehicle was designed after experience in Chechnya for defending tank and infantry units in urban combat. It replaces the main gun with twin 30-mm cannon and AT-9 launchers. 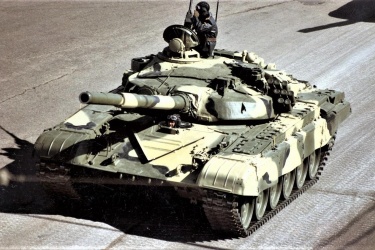