The KV-2 was an artillery support variant of the KV-1 that was developed as a result of combat experience during the 1940 Russo-Finnish War. This conflict had necessitated a weapon that could effectively take on reinforced bunkers and other fortifications as the guns of existing tanks was inadequate for that task. The KV-1's hull thus became the platform for mounting a 152mm L20 howitzer capable of firing an anti-concrete shell. To accommodate such a large gun, a massive box-like turret was designed, giving it a silhouette similar to the British Bishop self-propelled gun platform. The turret alone weighted 12 tons, due to exceptionally thick armor, but the drawback was a massive profile of nearly 5 meters that made it easy to spot at a distance. Still, it was practically invulnerable at the time of its introduction except to high-velocity armament at very close range, this gave it its nickname of "Dreadnought" to crews. Like the KV-1, the KV-2 suffered from plenty of mobility and reliability issues, not least the result of maintaining the same engine despite the new tank's added weight. Traverse could also be complicated if the tank was not on even ground. As a result, the KV-2 was of little use in mobile warfare but performed well when used for static defense after Barbarossa. Most of those taken out of action during the opening battles were lost due to mechanical failure rather than combat. By 1942 only a few were left in service as production was relocated east of the Urals and shifted to other designs.

Development of what became the KV-2 started during the Russo-Finnish War. An initial proposal was the T-100U armed with a 130mm B-13 naval gun but this was not accepted. Two further proposals had a lengthened KV-1 hull armed with either a 152mm BR-2 or 203mm B-4 gun but these two were eventually rejected in favor of a more simple design that kept the KV-1 hull unchanged and used a standard 152mm L20 gun instead. 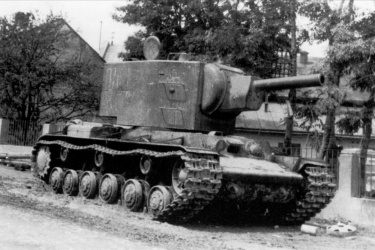