The T-54/T-55 series of main battle tanks have the distinction of being the most widely produced tanks in history, exceeding even the production runs of the wartime T-34 and M4 Sherman. The T-55 was a revolutionary design for its day, being the first main battle tank developed in the Soviet Union, with the right combination of armament, armor and speed that rendered the former distinctions between medium and heavy tanks obsolete. The T-54/T-55 series was based on the 100-mm D-10T rifled gun, which had been previously seen in an earlier incarnation in the wartime SU-100 assault gun. Its layout also became standard for all Soviet tanks since then, characterized by the rounded (nearly hemispherical in the T-55) turret that provided excellent ballistic protection during its day, despite its cramped nature compared to Western tanks. The relatively small profile is also an advantage although this limits the gun's depression, a problem also seen in its successors. Armor was adequate for its time, particularly up front, but weaker side and rear armor made it vulnerable in more closed environments. During the Cold War, license production of the T-55 took place in Poland and Czechoslovakia, while China reverse engineered the broadly similar Type 59. Up to 50 countries eventually adopted it for service, and it saw action in the 1956 Soviet invasion of Hungary, the Indo-Pakistani and Arab-Israeli wars (where it proved to be roughly equal to the US M48), the Vietnam War as well as the Gulf War, by which time they were thoroughly outclassed by modern Western designs. Despite its obsolescence, the T-55 remains in service with dozens of countries worldwide thanks to its low cost and good reliability, and have been heavily upgraded in order to remain viable in the modern battlefield.

The initial T-54 Model 1946 (Ob'yekt 137) featured a more traditional turret, reminiscent of the T-34 and T-44 that immediately preceded it, but limited production gave way to improved versions that corrected some of the design's early problems. The turret gradually evolved into its familiar shape as the Model 1949 (the first true production version), Model 1951, and Model 1953 were developed. A major upgrade in the mid-1950s resulted in the T-54A with the vertically-stabilized D-10TG gun with power-operated elevation and a snorkel for amphibious operations, and the T-54B with, with a two-axis stabilized D-10T2S as well as night-fighting equipment. By the late 1950s, production switched to the improved T-55 (Ob'yekt 155). This introduced NBC protection as well as a rotating turret floor, while increasing fuel capacity as well as ammunition load. The NBC system was further refined in the T-55A which also featured different secondary armament configurations. Converted T-54s to T-55 standard were known as the T-54M. A further modernization program took place in the 1980s and resulted in the T-55M with a new fire control system, engine, suspension and equipment as well as the ability to carry AT-10 anti-tank missiles. Some also received Kontakt-1 ERA and were designated T-55MV, while the T-55BV incorporates the more advanced Kontakt-5. Other modern versions include the T-55AM with added passive armor protection, and the T-55AD with the Drozd anti-tank missile system. There are further upgraded available for export, and which incorporate some of the features of more modern tanks like the T-80. Command versions (of which there were numerous sub-variants) were known as the T-54K and T-55K series. Other variants include the OT-54 and TO-55 flame-thrower tanks, the BTS series of armored recovery vehicles, the SPK-12G heavy crane, the MTU-1 and MTU-20 bridgelayers, and the IMR combat engineer vehicle. An assault gun known as the SU-122 was fitted with a 122-mm gun but most were later converted into ARVs, additionally the BTR-T was a heavy APC based on the T-55's chassis. Foreign variants are too numerous to list but most operators eventually incorporated local improvements and modifications (the Chinese Type 59 is listed separately). Captured Israeli tanks were known as the Tiran series, some with domestically-produced guns. 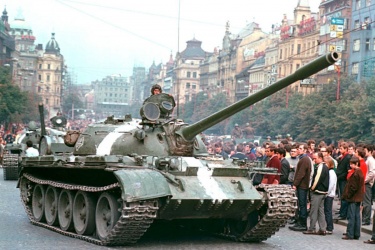