The BTR-80 was the last in the BTR series to have been developed by the Soviet Union before its dissolution. Visually, it retains the same appearance of its two immediate predecessors, the BTR-60 and -70 in what is now the classic layout of most 8 x 8 APCs. The BTR-80, however, incorporated a more powerful diesel engine as well as increased armament which can be elevated higher for use as an anti-aircraft gun. Additionally, six smoke grenade launchers were added to the rear turret. The BTR-80 improved on the BTR-70's troop compartment hatch which has a lower half that folds down to form a step, while the upper half opens forward thereby making unloading less risky but still offering the necessary protection (the hatch has a firing port as well). Like all the BTR series, it is also fully amphibious. BTR-80s saw service with the Soviet Army in the latter half of the War in Afghanistan, and have also been used on peacekeeping operations in the Balkans. It has been heavily exported to Soviet client states and former U.S.S.R. successor states, often with local modifications.

The basic BTR-80 entered service in the mid-1980s and went through various minor improvements before resulting in the BTR-80A, which featured a new turret armed with a 30-mm 2A72 gun (the same installed co-axially in the BMP-3). A more recent modernization has resulted in the BTR-82A with a more powerful engine and other improvements, and has recently begun production by MIC in Russia. Command vehicle variants include the BTR-80 M1989/1 and the BTR-80K command post. Other non-combat types include the RKhM-4 NBC reconnaissance variant, the BREM-K armored recovery vehicle, and the BMM armored medical ambulance. The chassis of the BTR-80 has also been adapted as a self-propelled gun, known as the 2S23. 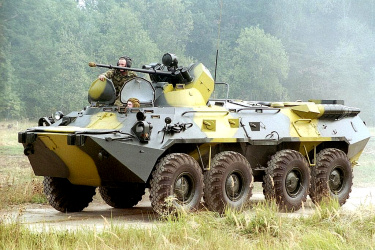