Whereas the BMP-2 was a direct descendant of the BMP-1, the BMP-3 is a radically different design and is by far the most powerfully armed IFV in the world. The most prominent new addition is the 100-mm 2A48-1 smoothbore gun, the largest such gun fitted on an IFV and which is also capable of firing the AT-10 anti-tank missile. Furthermore, secondary armament includes a 30-mm 2A72 coaxial autocannon and all weapons are capable of being fired while on the move. The BMP-3 also features an unconventional crew layout due to the fact that the engine is located in the rear of the hull, rather than forward. Two infantrymen are therefore seated next to the driver while the remaining five in a troop compartment above the engine (five firing ports are provided). As is the case with the rest of the BMP series, amphibious capability is retained through two water jets fitted at the rear of the hull, and there is NBC protection for the crew as well. Optional equipment include explosive reactive armor (ERA), as well as an electro-optical jamming system. Aside from Russian service, the BMP-3 has had numerous export orders, mainly to Azerbaijan, Kuwait, South Korea, the UAE, and Venezuela. It has also been offered to India.

The initial production version BMP-3 entered service in 1987 and has been followed up with an upgraded variant, the BMP-3M with a new turret (including upgraded fire control and sights) and engine. It also can be equipped with a wide array of weaponry and fitted with ERA blocks or additional armor protection. A naval infantry version is known as the BMMP but has the BMP-2’s turret, while the more capable BMP-3F features significantly improved amphibious capability. Other variants include the BREM-L armored recovery vehicle, 2S31 Vena 120-mm mortar system and a pair of anti-tank missile platforms designated BMP-3 Kornet (firing the AT-14 missile) and BMP-3 Krizantema (AT-15). 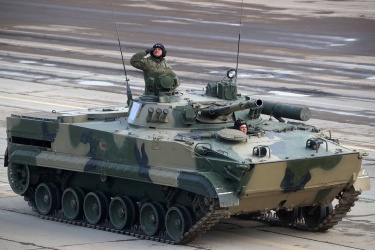