When it was first introduced in 1940, the T-34 was unquestionably the finest tank in the war. By 1945 it had contributed more than any other armored vehicle in bringing victory to the Red Army after four years of the most intense combat of World War II. As such, it can easily lay claim to have been the single most important tank in history and one of the few true war-winning weapons ever built. It was revolutionary for having unprecedented armor protection as well as having the most powerful gun of its day. The armor benefited from having a sharply sloped hull and turret which were virtually impenetrable to German tanks after the 1941 invasion; these, in turn, could be easily taken out by the 76.2mm F-34 high-velocity gun. The T-34 had a modified Christie suspension with five large road wheels and wide tracks, this gave the tank excellent mobility and cross country performance. On the negative side, the small turret had only two crew members which meant that the workload of the commander was increased. Crew comfort and visibility were also inferior to German tanks. This was partly addressed with the addition of a more powerful 85mm D-5T gun in 1943 in order to keep it competitive with newer tanks like the Panther and Tiger. As such, the T-34 remained the main Soviet front line tank throughout the entire war serving in all major Soviet operations from the start of Operation Barbarossa (around 1,000 were available to the Red Army when the Germans invaded) down to the Battle of Berlin. They remained in service (and production) for some time after World War II before being replaced by its successor, the T-54/55 series in the 1950s. However, they found themselves in use by nearly 50 armed forces including most Warsaw Pact countries (it was license produced in Poland and Czechoslovakia) and Soviet post-war client states, notably North Korea which used them extensively during the early phases of the Korean War. There they proved superior to M24s but were outclassed once large numbers of M26s became available. Some were in action as recently as during the conflict in the former Yugoslavia.

Design began in 1937 under engineer M. I. Koshkin who was tasked with developing a new medium tank. The initial A-20 prototype was a wheeled/tracked design with a 45mm gun but this was changed into a fully tracked vehicle with a 76.2mm gun in the A-32 prototypes, later T-32, that were completed in early 1939. It was subsequently decided to increase the armor further in what became the initial T-34/76 (Model 1940). The F-34 was first installed in the Model 1941 along with thicker armor and either a welded or a cast turret. Meanwhile, the Model 1942 introduced a wider track with a waffle pattern. The last variant with 76.2mm guns was the Model 1943 which featured a redesigned hexagonal turret that increased crew space and eliminated a shot trap; other improvements included, steel rimmed road wheels and a new transmission. At this time it was decided to give an armament boost by arming the T-34 with a more powerful 85mm D-5T gun, these were then known as the T-34/85 (Model 1943). Another notable change was the inclusion of a larger cast turret with a three man crew. Model 1944 was armed with the ZiS S-53 gun along with some other superficial changes. The Model 1945 was the final wartime variant with an electrically powered turret traverse, a larger commander's cupola and a TDP smoke system. Post-war variants included the Model 1946 with an improved engine, as well as the Model 1960 and Model 1969 with engine and component improvements. Other Soviet variants included the OT-34 and OT-34-85 flame-thrower vehicle, the PT-34 mine roller tank, T-34-T armored tractor, SPK-5 crane, and T-34-TO technical maintenance vehicle. 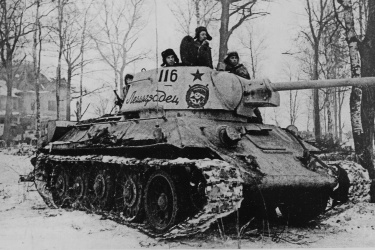