The BM-30 Smerch ('Tornado') is the most powerful multiple rocket launcher vehicle currently in service with the Russian Army, and at 300-mm, also the largest caliber vehicle of its kind in service anywhere in the world. The BM-30 is based on either the MAZ-543M or MAZ-79111 8 x 8 artillery trucks, which are also the basis of numerous other delivery systems as well as the BM-30's resupply vehicle. The larger chassis is necessary given the total weight of the system at nearly 44 tons, making it twice as heavy as the BM-27. The BM-30 features 12 rocket tubes is a somewhat unconventional arrangement of two banks of four tubes connected by a top row of four tubes. The standard high-explosive rockets have a range of up to 70 km and a full salvo can be launched in 38 seconds. Other types of ammunition include anti-personnel and anti-tank cluster munitions, HEAT rounds, and even a thermobaric round. More recent rounds can extend the range to 90 km. Like the BM-27, however, reloading times are somewhat slow compared to Western MRLs like the M270, taking 20 minutes in total. The BM-30 entered service shortly before the end of the Cold War and was issued at a Military District level, with its main objectives being enemy missile and artillery batteries, strongpoints, and command nodes. It has been widely exported, with many local versions based on indigenous hulls. It has been in use since the Second Chechen War, and more recently in the Syrian, Donbass, and Nagorno-Karabakh conflicts. 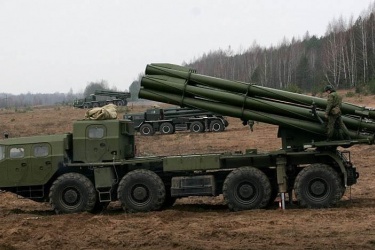