The USSR took a head start in the development of infantry fighting vehicles thanks to the BMP-1, the first of its kind. IFVs were designed as a vehicle that could not only carry infantry troops into battle but allowed them to fight the enemy without having to dismount. The IFV’s firepower would also provide them with greater support after they were on the ground. The design of the BMP-1 was therefore optimized by having the engine placed in the forward hull; this allowed the rear hull to be used for carrying up to eight fully equipped troops that could dismount from rear-opening doors. Despite not having the same protection as a tank, the BMP-1 armor was enough to defend the troops and the crew from small arms and artillery, while its own armament consisted of a 73-mm 2A28 smoothbore firing HEAT and HEAT-FE rounds as well as AT-3 anti-tank missiles. Additionally, firing ports were provided in the hull so that the infantry could fire from within. Other features included amphibious capability as well as NBC protection in the belief that a likely against NATO would involve nuclear or chemical weapons. Thousands of BMP-1s were built in a production run that lasted well into the 1980s, and also included license production in Czechoslovakia, Romania and India, as well as unlicensed production in China as the Type 86 (covered in a separate entry). Modernizations took into account combat deficiencies encountered in the numerous conflicts where it was involved, such as Yom Kippur, Angola, Vietnam and Afghanistan, but was eventually superseded (but never fully replaced) by the BMP-2.

The prototype BMP (Ob’yekt 764) which stands for Boyevaya Mashina Pekhoty (infantry fighting vehicle) gave way to the initial production BMP-1 in 1966. Its first major upgrade resulted in the BMP-1P in the mid-1970s taking account lessons learned during the Yom Kippur War. This variant was equipped with AT-4 or AT-4B missiles even though the launchers compromised its NBC protection. The ability to carry anti-air missiles was also provided as well as smoke grenade launchers. A second major upgrade in the 1980s became known as the BMP-1D, and incorporated extra protection against mines and heavy machine guns as a result of combat experience during the Afghanistan War. A command variant was designated BMP-1K and provided field tables and map boards for officers as well as improved communication and navigation systems (follow ups included the BMP-1KSh and -1KshM). Post-Cold War variants include the BMP-1-30 (with a 30-mm V-30 gun and an uprated engine), and the BMP-1M, also with a 30-mm gun and AT-14 missile launchers, as well as more modern equipment. There are plans to upgrade all remaining Russian units into -1M standard. Non-IFV variants included the BRM-1 reconnaissance vehicle with a wider turret that was moved to the rear of the hull and with additional electronic equipment as well as a six-man crew. There was also the PRP-3 artillery reconnaissance vehicle, the BREM-2 armored maintenance-recovery vehicle (with the turret removed), and the IRM engineer reconnaissance vehicle. The BMP-1 was also extensively modified by its non-Soviet/Russian users, including future NATO members which upgraded them with Western equipment. 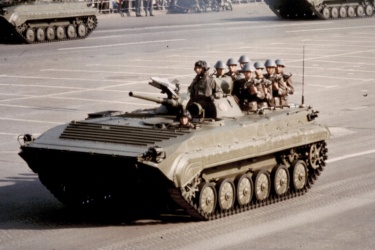