China is a relative newcomer to the armored vehicles market, having no experience prior to the 1950s in developing an indigenous arms industry. The Asian giant has made great strides since, beginning with crude copies of Soviet vehicles but now developing completely independent designs in almost all categories of AFV technology, and which in some cases come close to rivaling their Western counterparts.

Tanks were introduced to China by the warlord Zhang Zuolin, which initially arranged the import of French Renault FT-17 tanks. A more thorough process of mechanization was started in the 1930s, but this relied entirely on foreign designs, mostly British, Italian, and German, the latter which also supplied numerous advisors to help modernize the Chinese Army. Japanese pressure eventually forced the Germans out, and these were substituted by Soviet advisors who also supplied the Chinese with numerous pre-war designs shortly before World War II began. After 1941, the US became the prime supplier of military equipment to China, offering tanks such as M3 Stuarts, M4 Shermans and M18 Hellcats as well as copious amounts of other vehicles like trucks. Soviet assistance resumed after the war, and local production of the venerable T-34/85 was undertaken, many of which went on to serve during the Korean War.

By the 1950s, the Chinese took the first steps towards building their first tank designs, initially the Type 59 which was essentially a copy of the Soviet T-54. By 1969, the Sino-Soviet split ensured that Soviet assistance would no longer be forthcoming, but the country’s nascent economic and industrial might would see it gradually develop a myriad of indigenous designs that gradually veered away from their Soviet influences, although this is still pronounced in many cases. A thaw in relations with the West from the 1970s onward also enabled it to obtain Western technology. China’s most modern battle tanks like the Type 99 share many of the same design philosophies of Western models, as the Chinese themselves made note of the ease in which US tanks dispatched Iraq's Soviet- and Chinese-supplied armor during the Gulf War. As part of China’s ascent towards superpower status, the People's Liberation Army (currently the world's largest) will see its technological prowess continue to improve as it seeks to catch up with the US.

There are currently 29 entries and data on 33 variants.

China's first tanks, like the venerable Type 59, were crude copies of Soviet designs. 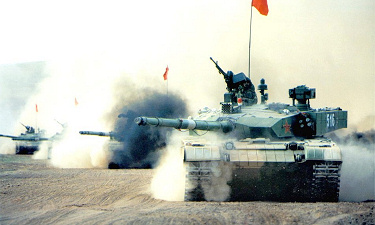 The Asian dragon now packs a powerful bite thanks to modern designs like the ZTZ-99.