The PLZ-07 is the latest in a long line of 122-mm self-propelled howitzers all of which were built before the turn of the century and which are therefore in need for a more modern replacement. The PLZ-07 features an all-welded steel hull and a chassis based on that of the ZBD-04 IFV with the driver seated at the front left, the engine compartment to his right, and the fighting compartment to the rear. The turret is noticeably more angular than that of its immediate predecessor, the PZL-89, and mounts a PL-96 (Type 96) 122-mm howitzer which, like the Type 86 howitzer of the PZL-89, is based on the Soviet D-30. It can fire standard rounds up to a range of 18 km, extendable to 27 km using rocket-assisted projectiles. Laser-guided projectiles can also be fired and its maximum rate of fire is 6-8 rounds per minute. A 12.7-mm machine gun is provided as defensive armament and there is also NBC protection. Although the basic variant lacks amphibious capability, a specially-designed amphibious version also exists. The PLZ-07 is currently in service with the PLA as a replacement for the Type 70, 85, and 89 SPHs which are gradually being phased out. Unlike its 155-mm contemporary, the PLZ-05, no export versions have been made.

The PZL-07 was first observed on 1 October 2009 during the National Day parade and is therefore presumed to have entered service around that time. The PLZ-07B is an amphibious version that features a redesigned hull based on that of the ZBD-2000 as well as twin waterjets for propulsion. 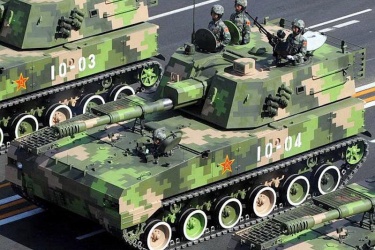