Based on the earlier Type 80, the Type 85 was the first Chinese tank to feature a welded steel turret, giving it a more modern look compared to its predecessors all of which strongly resembled the Soviet T-54/55 due to their rounded cast turrets. A layer of composite armor is also added to the glacis plate and the turret front; the first Chinese tank to feature this. The Type 85 incorporated a host of equipment upgrades including a computerized fire-control system and independently stabilized sights which enable the crew to fire on the move. The Type 85 initially retained its predecessor's 105-mm rifled gun but this was later upgraded into a 125-mm smoothbore fed from an autoloader which kept the crew to just three. Its ammunition is cross-compatible with that of the T-72. A collective NBC system is also added, compared to the individual system of the Type 80. Although it was not initially adopted by the PLA, the Type 85 was exported to Pakistan, it's only export customer (some were built under license). Only later were upgraded versions taken over by the PLA although still in relatively small numbers compared to other tanks in the army's arsenal.

The Type 85-II and Type 85-IIA were first revealed in 1989, preceded by the prototype-only Type 85-I. These were armed with 105-mm Type 83 guns. This was substituted by the 125-mm smoothbore in the Type 85-IIM which also features an image stabilized fire control system (ISFCS). Pakistani export versions are known as the Type 85-IIAP but were modified to include the 125-mm gun. A final variant is known as the Type 85-III (often referred to as the Type 88C) which includes a more powerful engine as well as ERA protection. Earlier PLA and Pakistani variants were modernized to this standard, and it went on to serve as the basis for the Type 96 described separately. 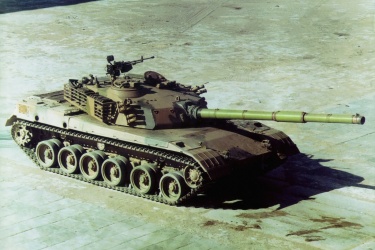