The Type 80 was China's first second-generation tank, although it appeared at a time when third-generation models were already in service with NATO and the USSR. It retained the general layout of its predecessor, the Type 69, which it still strongly resembles, notably in the rounded cast turret (the last Chinese design to follow Soviet practice in this regard). Armament consists of a 105-mm Type 83 rifled gun, adapted from an Austrian NATO-standard model similar to the British L7. This allows it to fire both Chinese as well as NATO ammunition. The Type 80 also has a host of equipment upgrades including a computerized fire-control system, laser rangefinder, gun stabilizer system and a new suspension with six road-wheels which gives it greater cross-country mobility. Some equipment is of Western origin, while the engine is a license-produced design from MTU of Germany. A more advanced variant known as the Type 88 also includes ERA protection and an auto-loader in some versions. Compared to its predecessors, the Type 80/88 has been built in much smaller numbers and has been exported only to Burma and Sudan.

Concept studies for a new second-generation tank began in 1978 and the first prototype was completed in 1985, receiving the Type 80 designation. A small number of initial vehicles were built before the next main variant, the Type 80-II. This had numerous equipment upgrades as well as provision for 'Boom Shield' protection but was also produced in small numbers. A more comprehensive upgrade resulted in the Type 88 which entered service in larger numbers. This had a new electrically-operated smoke grenade discharger system as well as Type FY ERA protection in place of the 'Boom Shield'. Sub-variants include the Type 88A with a slightly longer Type 83-I gun, the Type 88B with an auto-loader, and the Type 88C with a 125-mm smoothbore gun as well as a newer fire-control system. 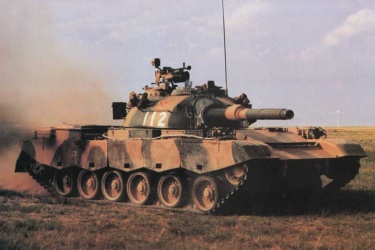