Following deliveries of Soviet PT-76 amphibious tanks, the Chinese decided to develop an indigenous variant which became the Type 63. The Type 63 shares the general boat-like hull design and layout of the PT-76, albeit with a shallower glacis plate. However, the turret is completely different, being a cast rounded design reminiscent of the Type 62 light tank. Armament consists of an 85-mm rifled gun, believed to be identical to that on the Type 62. However, this was later upgraded to a more powerful 105-mm gun on later variants. Amphibious capability is provided through twin water-jets of Russian design; like many amphibious vehicles, a trim board must be erected at the front of the hull before entering the water and bilge pumps switched on. There is no NBC protection or night vision equipment although a laser-rangefinder is provided and a computerized fire-control system is fitted on later units. The Type 63 remains in PLA service, likely for the purpose of a potential invasion of Taiwan. It has been exported to numerous Chinese client states, notably Vietnam which used it in the Vietnam War and later, the Sino-Vietnamese War. Like the Type 62, it suffered due to relatively thin armor but showed great mobility in terrain that was difficult for heavier tanks. 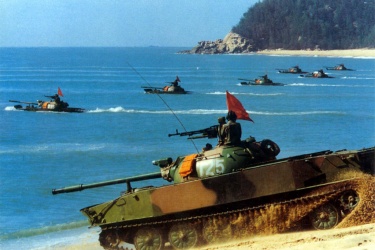