The PLZ-45 (also known as the Type 88) is a 155-mm self-proplled gun-howitzer developed by China for the export market although it was also adopted by the PLA. The PLZ-45 features an all-welded steel hull with the driver seated in the front left, the engine to the right, and the fighting compartment covering the remainder of the vehicle. The large, fully traversible turret mounts a 155-mm 45-caliber gun-howitzer that, unlike other Chinese SPGs, is not based on an existing towed weapon. The chosen caliber of 155-mm (in contrast to the locally-preferred 152-mm caliber) enables it to fire foreign-designed projectiles such as the US M107 HE round. There is a considerable increase in range compared to the Type 83, with standard rounds reaching a range of 30 km (almost double that of the Type 83) base-bleed rounds extending this to 39 km and at a maximum rate of 4-5 rounds per minute. The fire-control system can be both automatic or manual. Othe features include NBC protection and a 12.7-mm machine gun as defensive armament, although amphibious capability is not provided. Export customers of the PLZ-45 include Algeria, Ethiopia, Kuwait, and Saudi Arabia; the later two countries have employed them during its intervention in Yemen. It has also been in service with the PLA although it has since been replaced by the PLZ-05.

The prototype of the PLZ-45 was first seen in 1988 with production commencing following initial export orders from Kuwait in 1997. There are no known variants besides the original model although it is likely that many have been customized on the basis of export client requirements. 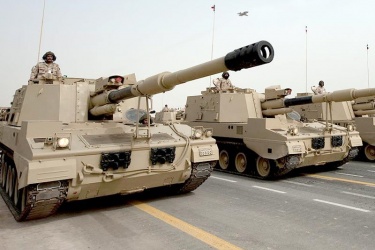