The Type 62 light tank was the first independently designed armored vehicle produced in China, although it borrowed heavily from the Type 59 MBT; in effect, it is a scaled-down version. Physical appearance and layout are almost identical to that of the Type 59 but can be distinguished by the shortened hull and lower caliber main armament. This consists of an 85-mm rifled gun which can fire APDS, HEAT, and HE rounds, giving it adequate firepower for a light tank of its day. Nevertheless, the Type 62 is lacking in certain key capabilities, including amphibious propulsion, NBC protection and has no infra-red night vision either. Additionally, it features thinner armor than the Type 59 in order to keep the weight down. The Type 62 has since been retired from PLA services but remains in use abroad. It was used by North Vietnamese forces during the Vietnam War and later by the PLA in the Sino-Vietnamese War where they suffered severe losses due to their weak protection. Other users include most of China's typical client states including Bangladesh, Cambodia, North Korea, Sudan, Tanzania, Thailand, and Zaire.

Development began in 1958 and was official designated Type 62 (industrial designation WZ132) in 1962. Upgrades include the Type 62-I with numerous equipment improvements following lessons from the Sino-Vietnamese war, and the Type 62G with improved armor and a new welded turret and a 105-mm gun. The Type 70 is another variant with similar equipment upgrades but retaining the older 85-mm gun. Non tank variants include the GJT 211 armored bulldozer and GSL 131 (Type 82) mine clearing vehicle. 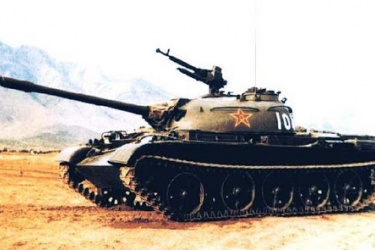