From the 'Fokker Scourge' of World War I to the Messerschmitts and Stukas that launched the Nazi blitzkrieg, German aviation has put an indelible mark on military history, its prowess not only cemented by amazing designs but also some of the finest pilots ever to take to the skies. Despite languishing after its World War II defeat, it is now an integral part of the European industry.

Germany was quick to realize the potential for aircraft having a useful battlefield role and is perhaps known best for being the first country to successfully fit a synchronized forward-firing machine gun on an airplane. The result was the Fokker Scourge of 1915 where German Eindeckers wrested away air superiority from the Allies. The air war would swing both ways over the next few years but the Germans were never too far behind its enemies although by war’s end the superior numbers of British and French aircraft put the Luftstreitkräfte at a disadvantage even despite the skill and tenacity of its pilots, such as Baron von Richtofen (the Red Baron), who became the war’s leading ace. After the Armistice, Germany was barred from having an air force, although aircraft development continued in secret. By the time the Nazis reached power in 1933, the seeds of a nascent air force, know renamed the Luftwaffe, had been sown.

The Luftwaffe was quick to embrace the doctrine of combined arms operations, and was built to support the ground forces in their quick armored thrusts that would later be known as the Blitzkrieg. By the start of World War II, the Luftwaffe had established its self as a frighteningly efficient force, thanks to the effectiveness of its Bf 109 fighters and Ju 87 Stuka dive bombers which became an enduring symbol of the Nazi conquest of Europe. However, as the war dragged on the limitations of the Luftwaffe became evident, not least inefficient production and the lack of strategic bombing capacity. As the German armies were stretched thin across the continent, it became too weak to retain the initiative and was forced to fall back on the defensive, especially against an ever-increasing Allied onslaught that from 1943 onward gradually laid waste to German cities and factories. German technology, far ahead of that of the Allies, was incapable of making the difference notwithstanding the introduction of jet fighters like the Me 262. By the time Allies raced into Germany in 1945 and the Red Army rolled into Berlin, the mighty Luftwaffe with its great aces like Hartmann, Marseille and Barkhorn had been all but defeated.

German industry was in tatters after the war, and the revived Luftwaffe was largely equipped with US designs like the F-104 Starfighter and F-4 Phantom to face off against the Soviet threat. Towards the end of the Cold War, German aviation industry became increasingly reliant on European collaboration and contributed to some of the finest aircraft in recent decades such as the Tornado and Tyhoon, as well as helicopters like the Tiger. It is unlikely that Germany will be able to create truly indigenous designs in the future given the superior cost-effectiveness of multi-national development. However, its role as a major NATO power, and a partner in firms like Airbus and Eurocopter, will keep it at the forefront of technology.

There are currently 48 entries and data on 68 variants. 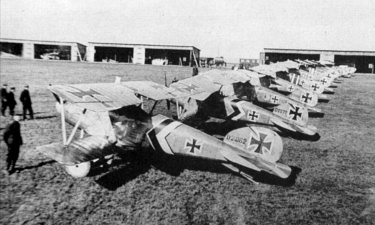 German aircraft like these Albatross D.IIIs would frequently wrest air superiority from the numerically-superior Allies. 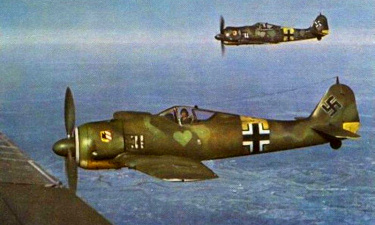 From the deserts of North Africa to the snowy steppes of Russia, the Luftwaffe commanded the skies in the early years of World War II.