One of the strangest and most unorthodox piston-engine aircraft ever designed, the Dornier Do 335 Pfeil (Arrow) was unique in having one nose-mounted and one tail-mounted engine, a configuration (patented by Dr. Claude Dornier) not seen in any other fighter during the war. The front engine would drive a tractor propeller while the aft engine drove a pusher screw, other features included a tricycle landing gear, a cruciform tail and even an ejection seat (the first German production aircraft to be equipped with one) while some featured an all-cannon armament to be used as Zerstörer heavy fighters. Testimony to the soundness of the design, the Do 335 could fly faster on one engine at 348 mph than some single-engine fighters. Unfortunately, official disinterest caused delays in production and entered service too late with no evidence of Do 335s ever being used in combat although a number did reach operational units in late 1945 even after the facility building them was overrun by the Allies.

The Do 335 was originally conceived as far back as 1940, the prototype flew on 26 October 1943 but only entered service in early 1945. Do 335A-1s were to be used as fighter-bombers and bomber interceptors though other variants included the Do 335A-6 and Do 335A-10 radar-equipped night fighters, and the Do 335B Zerstörer heavy fighter. 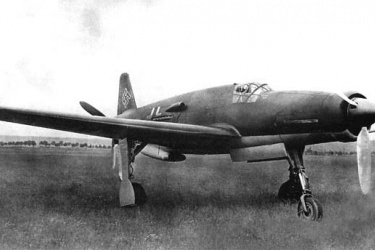