Another legendary design by Kurt Tank, the Focke-Wulf Fw 190 became arguably the best Axis piston-engined fighter of World War II and, in its latest variants, was equal to anything that the Allies could throw against it. The Fw 190, nicknamed Würger (butcher bird), was elegant and small despite the choice of a radial engine and outperformed the Bf 109 when it was first introduced in 1941. It also proved superior to the Spitfire Mk. V, something which came as a profound shock to the Allies as they saw the balance of air power swing in favor of the Luftwaffe once again until the hurried introduction of the Spitfire Mk. IX the following year which restored parity. The Fw 190 benefitted from great speed (it was the first German fighter to exceed 400 mph), ruggedness and an extremely powerful armament configuration that was gradually increased as the war progressed in order to combat Allied bombers in the skies over Europe. Unfortunately, early variants suffered from poor performance at high altitude which was where combat increasingly took place once the Allied bomber offensive began. The additional armament and protection also made it heavier and less maneuverable; consequently the Fw 190 was at a disadvantage against its main late-war opponent, the US P-51. These drawbacks were eventually rectified in later variants like the D-9 'Dora Nine' and the Ta 152 but these were built in too few numbers and entered service too late to make a difference. Unlike the Bf 109, the Fw 190 was also quite suitable for the ground-attack role where it served in both the Western and Eastern fronts with much success, losing little of its outstanding air combat capabilities and replacing the increasingly obsolescent Stuka in this role. Foreign operators of the Fw 190 included Croatia, Hungary, Slovakia, and Turkey. The Fw 190 was flown by some of the Luftwaffe's top aces including Gunther Rall (275 kills), Otto Kittel (267), and Walter Nowotny (258).

A prototype of the Fw 190 was first flown on 1 June 1939 and the initial production Fw 190A series was introduced in 1941. Of these, the Fw 190A-1 was immediately shown to be superior to the Spitfire Mk. V, this performance was slowly increased in subsequent versions like the Fw 190A-5 which had a lengthened nose while others had increased armament and could carry torpedoes. The most popular of the A series was the Fw 190A-8 which featured superior armament and armor protection and was produced in greater quantities than any other variant, many Fw 190As would also be used for ground attack. The sleek Fw 190D-9 was introduced in 1944 and featured a bubble canopy and a longer nose housing a Junkers Jumo engine; it largely overcame the altitude issues of the earlier variants and was more than a match for any late-war Allied fighter. Specialized ground-attack variants included the Fw 190F and Fw 190G which could carry 2,205 lb of bombs and drop tanks for greatly increased range, these were supeficially similar to the A series but the fighter-bomber versions had a more rounded cockpit. The final and most formidable variant was the Ta 152 (designated Ta after Kurt Tank) which, as far as piston-engined aircraft were concerned, was in a league of its own even though only a trickle escaped production lines before the war ended. 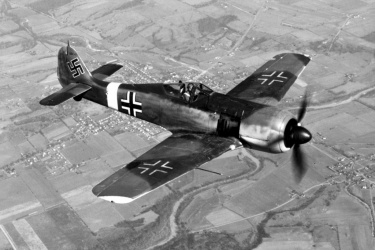